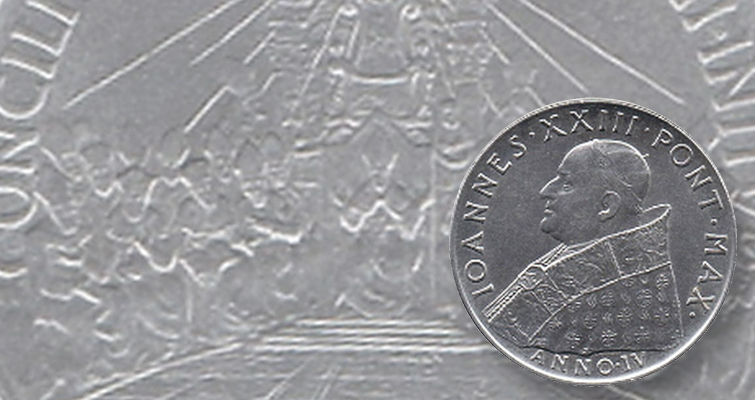 John XXIII issued millions of aluminum, aluminum bronze, steel, silver and gold coins between his election in 1958 and his death in 1963. This one, from 1962, celebrates the opening of the Second Vatican Council. 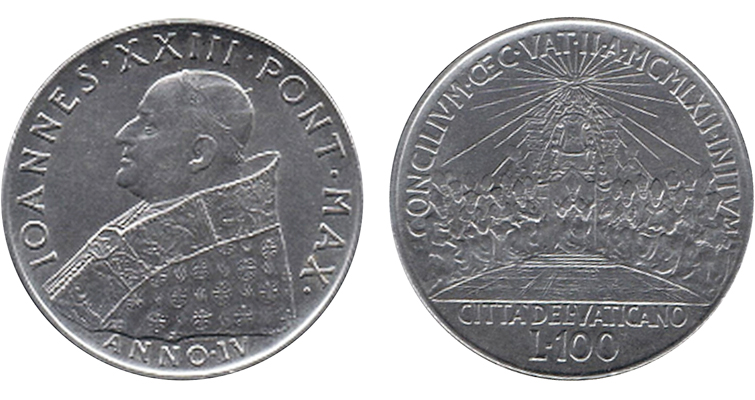 This 1962 100-lire Vatican City coin, issued in the fourth year of the papacy of John XXIII, celebrates the opening of the Second Vatican Council. The Vatican City coins typically show the pontiff on the obverse and a religious image on the reverse.

You can pick up coins issued by this saint for a dime or so in just about any junk box in the world.

Pope John XXIII issued millions of aluminum, aluminum bronze, steel, silver and gold coins between his election in 1958 and his death in 1963. The Vatican City coins typically show the pontiff on the obverse and a religious image on the reverse.

The beloved pope was canonized April 27, 2014, by Pope Francis, a pope whose substance and style are informed by the life of St. John XXIII.

The Vatican’s biography of Pope John XXIII begins, “When on Oct. 20, 1958 the cardinals, assembled in conclave, elected Angelo Roncalli as pope many regarded him, because of his age and ambiguous reputation, as a transitional pope, little realizing that the pontificate of this man of 76 years would mark a turning point in history and initiate a new age for the Church.”

On Oct. 11, 1962, the aging pope opened the first session of the Second Vatican Council. The New York Times recounted in a 50th anniversary article, “Over three years, from 1962 to 1965, some 2,800 bishops from 116 countries produced 16 documents that set the Roman Catholic Church’s course for the future.”

The most visible changes concerned the celebration of the Mass. Priests now faced the congregation and said the Mass in the language of the people — English in most of the United States, Spanish in heavily Hispanic areas.

John XXIII died before the council ended. Successor Paul VI closed the event. He noted in the final address on Dec. 7, 1965, “You see, for example, how the countless different languages of peoples existing today were admitted for the liturgical expression of men's communication with God and God's communication with men: to man as such was recognized his fundamental claim to enjoy full possession of his rights and to his transcendental destiny. His supreme aspirations to life, to personal dignity, to his just liberty, to culture, to the renewal of the social order, to justice and peace were purified and promoted; and to all men was addressed the pastoral and missionary invitation to the light of the Gospel.”

In 1962, John XXIII issued a set of commemorative coins celebrating the council. The 50-, 100- and 500-lire coins show the pope on the obverse and the bishops assembled beneath the Paraclete on the reverse. The steel 50- and 100-lire coins sell for just a few dollars each. The silver 500-lire coin catalogs for $30 in Uncirculated condition.