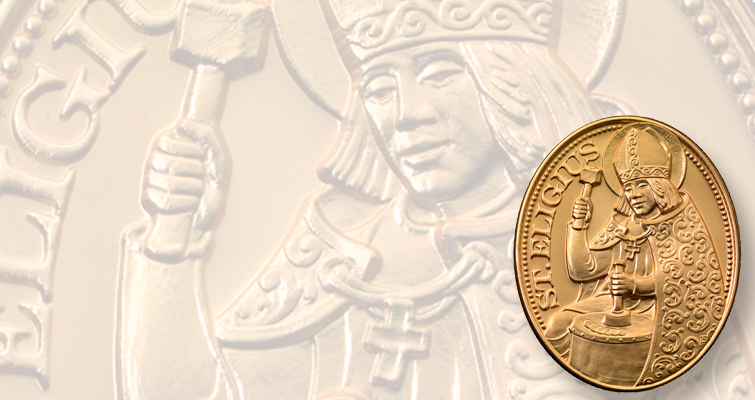 A bronze medal currently available from the Austrian Mint shows Saint Eligius as a bishop striking coins as master of the mint at Marseilles in seventh century France. 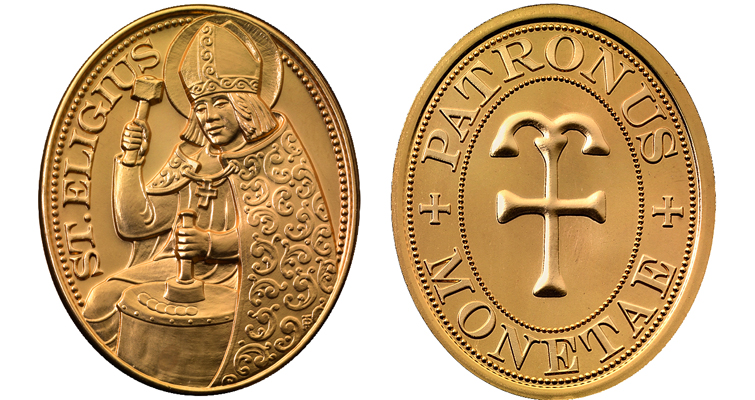 The Austrian Mint sells this bronze medal showing the saint at work for 18 euro.

St. Eligius (588 to 659 or 660) apparently took to heart the New Testament proposition that the want of money is the root of all evil and aimed to do something about it. He made money as mint master of Marseilles.

The Catholic Encyclopedia says that the saint’s father sent him to work with the noted goldsmith Abbo, master of the mint at Limoges, as a youth.

His skill and honesty were recognized by Frankish king Clotaire II, who commissioned him to make a throne of gold adorned with precious stones. The encyclopedia says, “His honesty in this so pleased the king that he appointed him master of the mint at Marseilles.”

After Clotaire II died in 629, the successor, Dagobert, named him chief councilor. The Catholic News Agency writes, “The charitable and honest Eligius took advantage of his status to obtain alms for the poor and to ransom Roman, Gallic, Breton, Saxon, and Moorish captives who were arriving at Marseilles daily. He was able to get the king’s approval to send his servants through towns and villages in order to take down and bury the bodies of the criminals whose bodies were executed and displayed as a further punishment. He founded several monasteries … built the basilica of St. Paul and restored the basilica of St. Martial in Paris. In honor of the relics of St. Martin of Tours, the national saint of the Franks, he had several churches built. He did the same thing for St. Denis, whom the king had taken as a patron saint.”

Eligius was consecrated as a bishop in 641 and died Dec. 1, 660. Over the years, he became venerated as a saint and is recognized today as the patron saint of goldsmiths and coin collectors.

Inge Lyse Hansen and Chris Wickham, writing in “The Long Eighth Century,” note, “The legend Eligius monet(arius) appears on coins struck at Marseille between c.625 and c.638 and … at Arles between c. 638 and 641, before Eligius returned north to be consecrated bishop of Noyon.” His name and title - ELIGIUS MVN - also appear on coins issued in Paris.

Eligius’ coins are scarce and highly sought after. In 2013 a tiny gold tremissis sold for 7,000 euro ($9,500) at a Fritz Rudolf Künker auction in Germany. The undated coin shows Clotaire II on the obverse and a cross-anchor symbol known as the Eligius Cross surrounded by the saint’s name on the reverse.

Less well-heeled collectors can buy medals showing the saint. The Austrian Mint sells a medal depicting Eligius as a bishop striking coins on the obverse. The reverse shows the anchor-cross. The bronze medal sells for 18 euro.

In 1966 the Van Brook Mint of Lexington, Ky., stuck antiqued bronze and silver medals show Eligius at work. These turn up on eBay from time to time, with bronze pieces generally selling for less than $10.

Next: A visionary saint