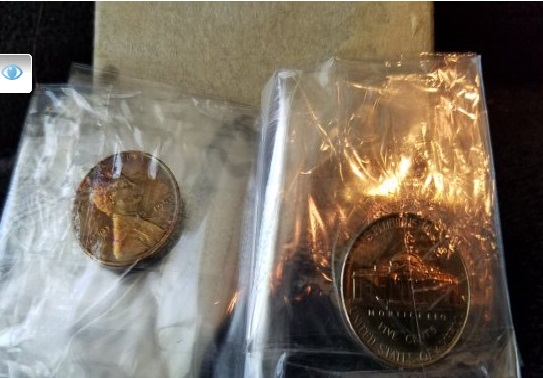 This box set lacks the dime and has been tampered with.

I like to bid on 1950 to 1955 Proof sets packaged in boxes, as the photo above attempts to depict. You can find them regularly in online auctions on such portals as Proxibid, HiBid.com and eBay.

The set’s coins, each thinly wrapped in cellophane, as depicted above, often sport vivid toning within the cardboard that houses them.

When I got the box, I was disappointed. The contents had been tampered with. The most expensive coin, the half dollar, which when slabbed can be worth hundreds of dollars, had been replaced with a lesser Proof half that had a pin scratch. Same with the quarter.

How could that be, you ask? Someone used a razor to slit the cellophane, took out the original half dollar and then put the impaired one in its place.

The quarter had the same damage and slit cellophane.

Worse, as you can see (or more likely, can’t see) from the auction screenshot above —look closely there—the dime was missing. This is one of the drawbacks of online bidding. You can only discern so much from non-numismatic photos and must go by descriptions. Even so, when a coin product has been tampered with and you cannot see it but win it, all sales are final.

That said, the cent was spectacular, and I collect rainbow Proof cents.

So I telephoned the auction company, PPI, out of New Jersey, and explained the situation. I did not blame the consignor. These sets have been kicking around for decades, and it would have been unfair to level such a charge.

And I have done business with PPI before and respect the company, which contacted the consignor, who had another 1950 box set, which I offered to buy, for $450, providing there was no buyer’s fee and the company shipped to my location for free.

This was agreed upon, and I soon should get the replacement set.

The lesson here is difficult. It was so easy to miss the missing dime from the photo, and who would have guessed that someone would have slit and replaced two Proof coins?

The upside, however, is the auction company. I buy only from ethical, trusted dealers. PPI falls into that category.

I’ll report on the new set when I receive it.