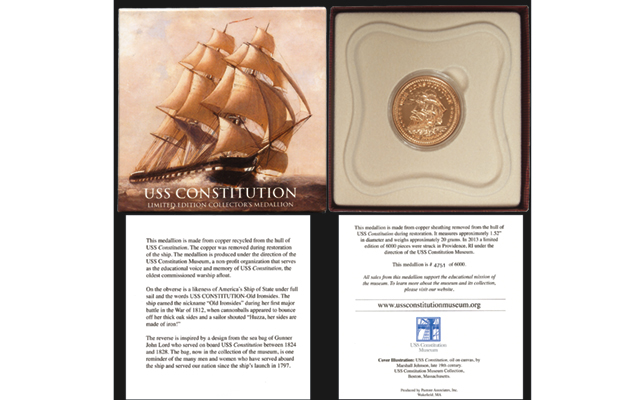 A copper relic medal was made from copper recovered from the hull of the USS Constitution, the world’s oldest warship, to celebrate the War of 1812.

?If someone told you that you could legally walk around with a piece of the oldest warship in the world in your pocket, would you believe them?

In one sense, the USS Constitution is owned by every American, but in another, the number of folks who can own a piece of the ship, as preserved in a relic medal, is severely limited.

Relic medals are medals that are struck containing metal or other substances recovered from, flown in or on famous ships, spacecraft or important historic artifacts, or from historic sites. Many relic medals are decades or centuries old, and signify famous American events (like the 1871 Great Chicago Fire or the 1898 Spanish-American War). On a trip to Boston this summer, I stumbled upon a modern relic medal with major importance.

The USS Constitution is the world's oldest commissioned warship. The ship, known as "Old Ironsides," was launched Oct. 21, 1797, as one of the first warships authorized by Congress. It currently is docked in the Charlestown (or Boston) Navy Yard.

Visitors may take a free tour to hear the exploits of the sailors and the ship. The ship received its name from the thick wooden hulls that repelled cannonballs during the War of 1812.

To mark the bicentennial of its greatest moment, and those who have served aboard the ship in battle and in peace, the USS Constitution Museum commissioned the striking of a medal using copper removed from the ship's hull, and a total of 6,000 medals were struck in 2013 by an unnamed Providence, R.I., company.

On the obverse of the medal is an image of USS Constitution under full sail with its name and nickname. The image is borrowed from an oil painting by Marshall Johnson that is part of the museum's collection.

On the reverse side is a design inspired by the sea bag of Gunner John Lord who served on board USS Constitution between 1824 and 1828; the sea bag is also part of the museum's collection.

Each medal measures 1.52 inches and weigh approximately 20 grams.  Each comes with a certificate of authenticity.

The medal is sold for $29.95, and is still available through the museum store both at the site and online.

Relic medals literally give collectors affordable ways to put their hands on history, and in the case of this medal is another example of the adage that “the hobby can be found everywhere.”