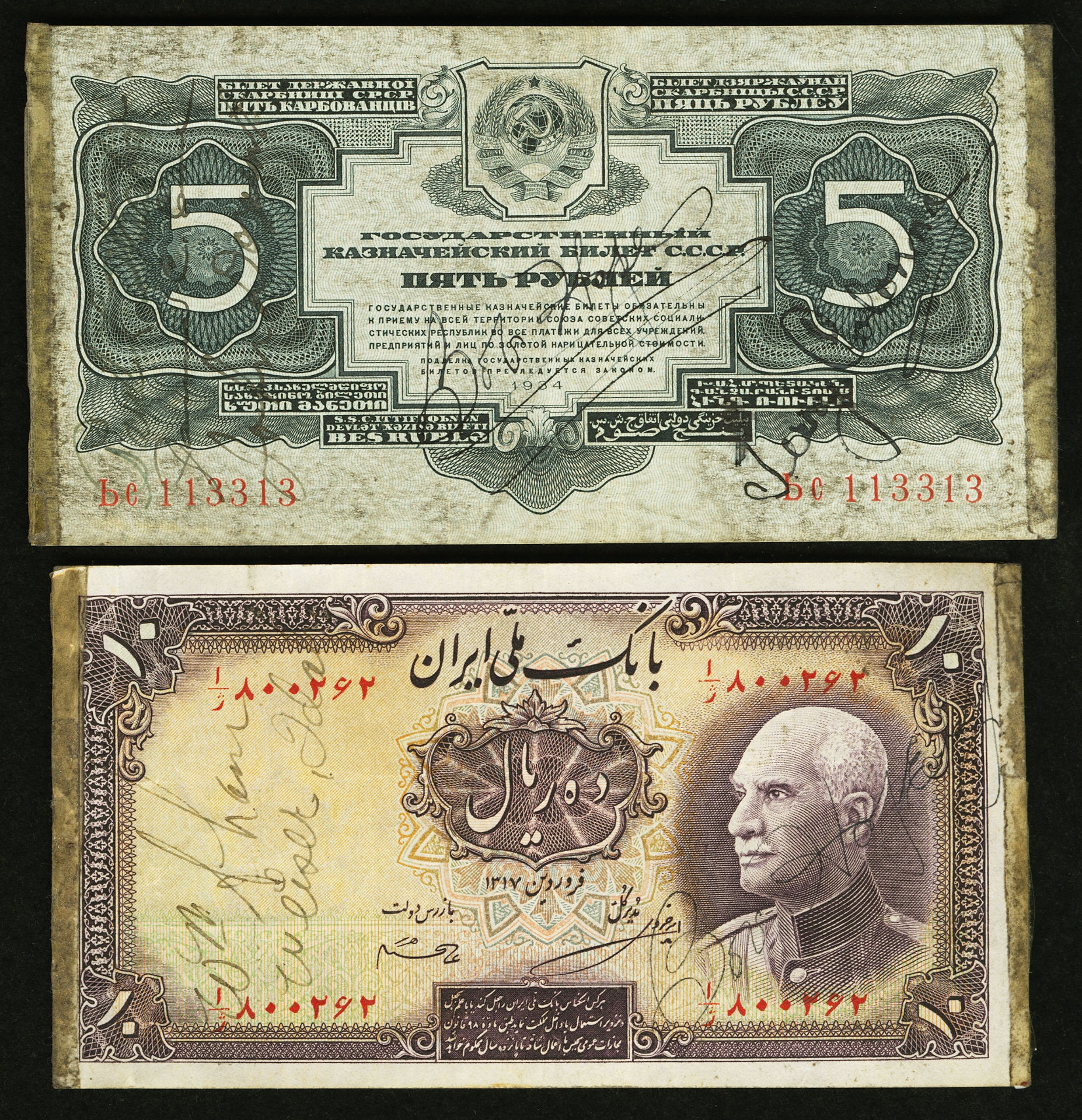 The somewhat bland design on this 1934 Russian 5-ruble note isn’t the eye-catcher. It’s the bold, hand-signed autograph of entertainer Bob Hope across the center of the note. Hope’s first overseas USO tour was in 1943 and that’s mostly likely where this portion of a short-snorter was signed. All images courtesy of Heritage Auctions.

Plain would not be the way to describe the design on the face of a very rare 1905 Bank of Portugal 50-mil reis ouro note issued for the Azores. It’s an exotic design from an exotic place. The Azores is a group of nine volcanic islands in the North Atlantic Ocean. 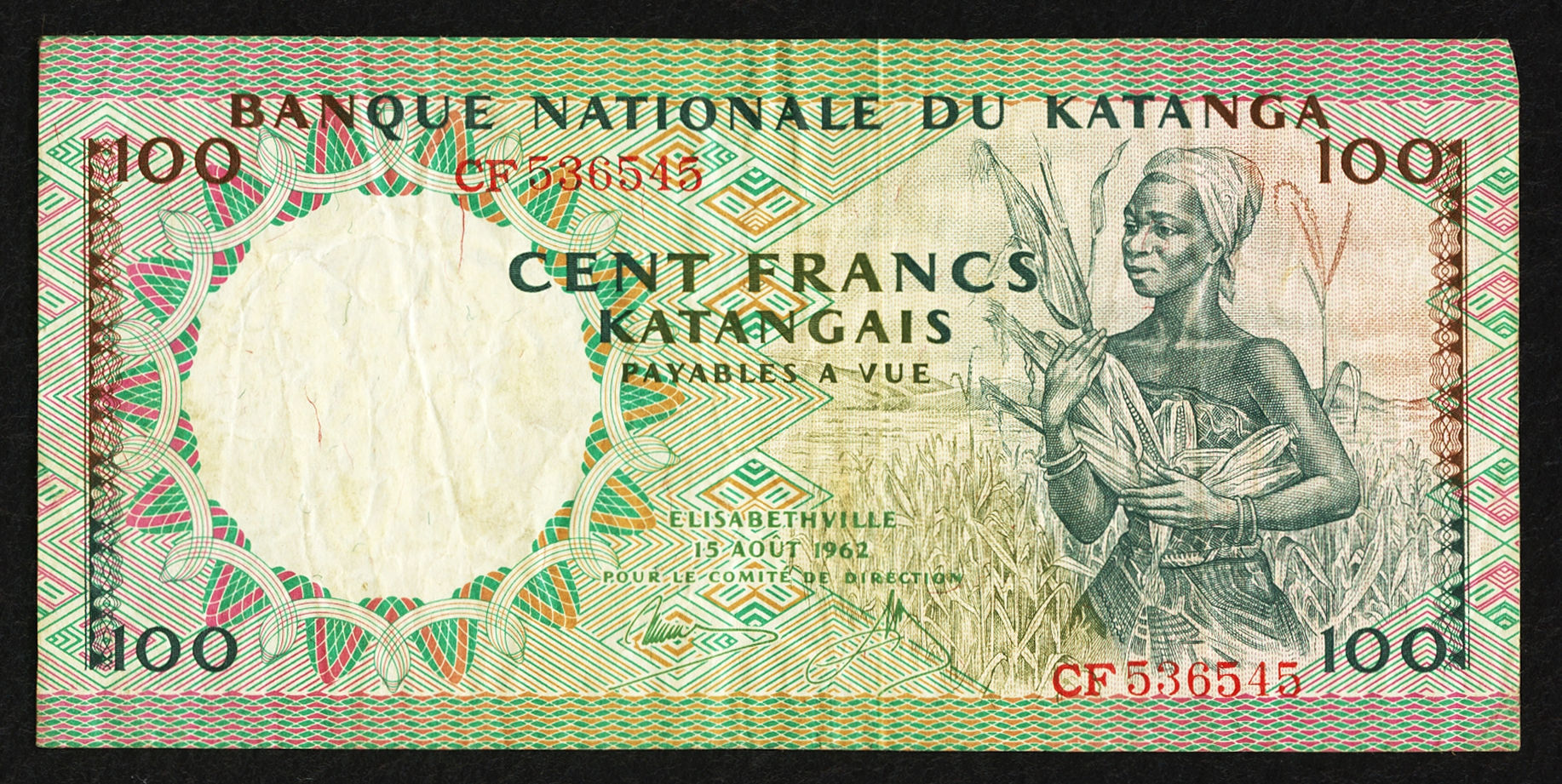 This National Bank of Katanga 100-franc note, dated Aug. 15, 1962, is a tangible piece of history from this short-lived nation.

Paper money aficionados are attracted to bank notes like ants scurry to a lollipop dropped on a sidewalk.

The sweetness of finding just the right note to expand or start a collection is irresistible.

But the notes are more than just a physical record of a country’s economic existence. The designs often tell a story, and the printed dates on the notes nail down a specific time in world events.

The story of the humans who’ve designed, used and saved these bits of history can become especially sweet memories.

A collector who seemed to understand the human aspect of collecting was Ruth Walden Hill. She died in 1995 at the age of 96 and spent almost half a century collecting paper money from around the world.

In an article published by Coin World in 1979, Mrs. Hill said:“Frankly, I have no favorite note. It is the excitement of the many facets of paper money that interest me.”

Heritage Auctions began offering some of her abundant collection of world bank notes at the April 2014 Central States Numismatic Society convention, and is continuing with sales at future Signature Auctions and Tuesday Internet sales.

Plain, exotic and historic notes all rub elbows, so to speak, in these sales.

Some examples include a 1934 Soviet Union 5-ruble note with a bland design. But it’s not the design that attracts the eye, it’s the bold, hand-signed autograph of entertainer Bob Hope across the center of the note. Imagine the stories told about how the autograph was obtained by a member of the armed services before it came to reside in Hill’s collection.

Hope’s first overseas USO tour was in 1943, and Russia is mostly likely where this portion of a short-snorter was signed. This note, along with an Iranian note also bearing Hope’s autograph, sold for $56 Sept. 8, 2014, at the Heritage Auctions Long Beach Expo World Currency Signature sale.

A short snorter is a note signed by various persons traveling together or who met up at different events, and the note records the meeting, according to the website for The Short Snorter Project. The website tells the story of the tradition, which started in the 1920s, and that once involved alcohol and IOUs. The notion of creating and collecting such monetary remembrances spread throughout the U.S. armed forces and was particularly popular during World War II.

Plain would not be the way to describe the design on the face of a very rare 1905 Bank of Portugal 50-mil-real-ouro note with a connection to one of Portugal’s far-flung possessions. The auction catalog described it as “a masterpiece of engraver’s art depicting ships navigating about rocks in rough seas,” with busts of Portuguese explorers Perode Alenquer and Diogo Cao at lower left and right foreground with an anchor between them.

An exotic design from an exotic place. The Azores, a group of nine volcanic islands in the North Atlantic Ocean, are one of two autonomous regions of Portugal.

The note, graded by PCGS Currency as Very Fine 25 Apparent for a minor stain on the face near the bottom center, sold for $3,525 by Heritage on April 24, 2014, during the Central States Numismatic Society convention.

A note from the short-lived nation of Katanga provides current and future generations with a tangible piece of history.

The design on the face of a National Bank of Katanga 100-franc note, dated Aug. 15, 1962, shows a woman hold ears of corn that appear to be freshly harvested.

The State of Katanga was a breakaway state from 1960 to 1963. It proclaimed its independence from the Republic of Congo-Leopoldville during a coup. A few short months after the note illustrated here was placed in circulation, the leaders of the breakaway state surrendered. The state was absorbed into its former homeland.

The Katanga note, graded Very Fine by the auction firm, sold for $99.88 at the Long Beach Expo World Currency Signature Auction Sept. 4 to 8, 2014, by Heritage Auctions.

So who was this woman who amassed such a fascinating collection?

Mrs. Adolf B. Hill Jr. III, as she liked her letters to be addressed, was widely considered to be the “grand old lady” of paper money collecting in North America, according to the biography for her induction in 2010 into the International Bank Note Society’s Hall of Fame.

Her interest in paper money began in the 1950s shortly after the death of her husband, Adolph. Her friends remember her as generous with her time and knowledge.

Paper money dealer Dusty Royer of Missouri said she was “first of all a collector, so condition [of the note] was secondary.”

Royer remembers Mrs. Hill as always being willing to help other collectors and especially researchers.

In his Note-ables column published in the May 25, 1998, issue of Coin World, Gene Hessler reflection on his quarter century friendship with Hill.

“Ruth Hill was an extremely good friend and she had considerable influence on me.  At American Numismatic Association conventions and the Memphis International Paper Money Show, we always spent time together talking paper money and socializing. Ruth’s extreme generosity included invitations to her many friends to join her for dinner during numismatic gatherings.”

The notes the gracious “grand old lady” collected have been preserved for future generations of collectors. They are a tangible reminder of a time and place not many of us will ever experience.

The notes are available to collectors who treasure the story behind the note as much as the note itself.