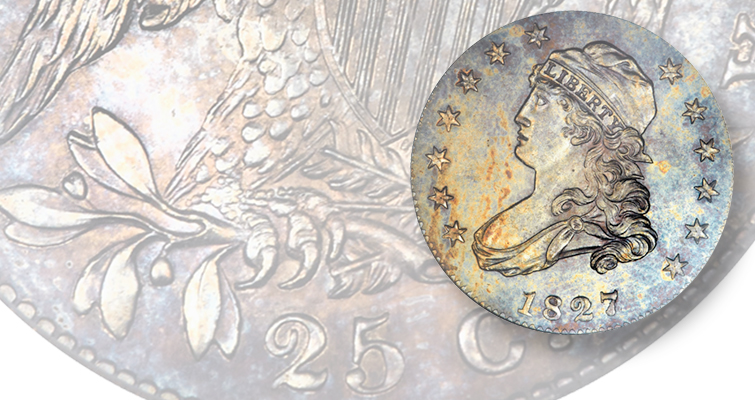 Previous
Next
The 1827 quarter dollar is a legendary rarity with three great stories.

Story I – Rory R. Rea, Dr. Glenn Peterson, Bradley S. Karoleff and John J. Kovach Jr. report in Early Quarter Dollars of the United States Mint that the coins “may have been given to mint staff as presents late in 1827. These officials maintaining their keepsakes could account for the presence of the 1827 quarter being unknown to collectors for decades.” The coin became known to collectors in 1857 when a brief article appeared in a New York City newspaper.

Story II – At some point – when and how are open to speculation – an original 1827 obverse die was paired with an 1819 reverse die, identifiable by the square-base 2 in the denomination. The dies, at this point, were fairly new and left no rough patches on the struck coins – no signs of a rusted die. Two of the coins were struck over 1806 quarters. Rea, et al, report: “Karl Moulton believes that these two strikes were produced in 1827 as an experiment with use of a ‘close collar.’ ” Close collars are used to form the edges of a coin. Open collars, used well into the 1820s, resulted in coins of varying diameter.

Story III – Rea, et al, report further: “Later, possibly in the 1850s these dies, now rusted, were resurrected and used to produce a dozen or so restrikes. Some of these restrikes were made from copper planchets and one of those copper planchets was silver plated.”

Breen speculated, “In 1858-59 workmen in collusion with Theodore Eckfeldt (the Mint’s night watchman and fence) retrieved the 1827 obv. from the Coiner’s vault and surreptitiously made about a dozen silver restrikes and possibly five copper ones.”

Breen noted Mint Director James Ross Snowden put a stop to the coinage shenanigans on July 30, 1860, by seizing all the Mint’s dies and storing them in his own vault.

Heritage Auctions set the date of the rusted restrikes about 1876, when Henry R. Linderman was Mint Director. Linderman’s estate (he died in 1879) included two restrikes, providing credence to the Heritage speculation.

Next: The coinage cover-up