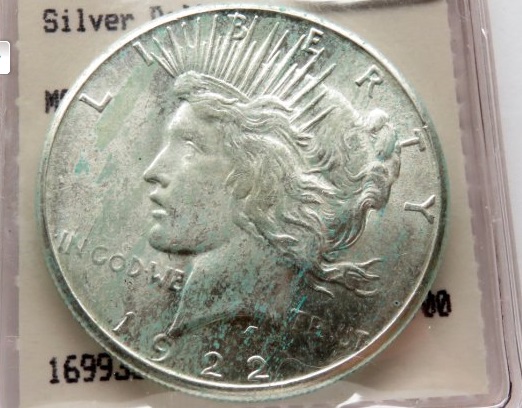 This 1922-S Peace Dollar has telltale PVC problems (green streaks) from being stored in a soft vinyl flip. But it can be saved.
?Increasingly, older coin collections are going to auction, many of which are conducted online via Proxibid, HiBid and other portals. Often those coins were kept in soft vinyl flips that interact with metal to cause various states of corrosive damage.

PVC is the abbreviation for polyvinyl chloride, a chemical composition. For flips to be pliable, manufacturers added a “plasticizer,” which emits gasses that trigger the corrosion, especially in the warm, dank environments where many collections have been stored.

There are several states of PVC corrosion, which I have written about before.

Some damage can be fixed, as in the coin depicted above, using conservation techniques as offered by Numismatic Conservation Services and PCGS Restoration Services. Coin dealers and experienced numismatists also know how to remove PVC contamination, but we don’t recommend doing that, especially if you are an inexperienced collector.

The point in this post is learning to recognize and cherrypick PVC coins that can be restored, like this 1922-S that came in a vinyl flip offered by Weaver Signature Coin and Currency auction. I won it with a $49 bid. Currently it is in the process of being restored. I’ll let you know what grade it gets when I receive it after conservation.

I bid on the coin because streaks can be eliminated with proper conservation techniques. When PVC is caked, or causes obvious pock marks in the metal, then you should bypass the coin.

I believe the coin I won to be Mint State 64 (worth about $225) with a shot at MS-65 (worth $1,000+). The 1922-S, the second largest mintage in the series, typically suffers from weak strike and is a condition rarity, with MS-66 considered a super rarity by major holdering companies. So, I like my chances at conservation.