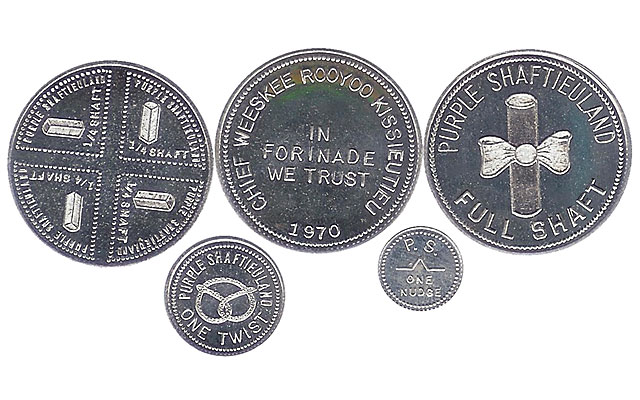 "Coins" from Purple Shaftiueland were issued by a coin dealer, Bob Kolasa, in 1970 in reaction to a growing number of noncirculating legal tender coins.
?Get taken on a ride to where?

You won’t find Purple Shaftieuland on a map – but they have“coins”!

If you’ve always wanted to issue your own coins, but don’t want to go the traditional route (see part one of this blog series), then you could always proclaim your own nation.

Such a nation doesn’t require land upon which to dwell, and may only occupy space in your imagination.

In so doing, you would be following a tradition of the last half-century,when “coins” for places like Bermania, Buck Island, the Grandy Duchy of Westarctica, the Ultimate State of TÆDIVM, and many others, have been issued.

Perhaps the most biting of these issues are the “coins” for the nation of “Purple Shaftieuland.”

In 1970, coin dealer Bob Kolasa created the coin series as a revolt against the flourishing of noncirculating legal tender coins from barely identifiable places, aimed specifically at collectors (a lament that might ring true even today).

The “coins” also poked fun at the practice of U.S.government foreign aid, and used stereotypical humor to make the point. The politically incorrect brochure accompanying the pieces also features very thinly veiled comments about some of the companies creating the market for international Proof sets in the late 1960s.

According to coin dealer Joel Anderson (who provided the brochure to Coin World), Purple Shaftieuland had five denominations: 1 nudge, 1 twist, and quarter-, half- and full-shaft pieces. The coins were issued in two versions, “brilliant brass” and“unanodized aluminum.”

According to the brochure, the exchange value is fixed: 100 nudges equal 10 twists, which equals one full shaft, which of course equals“nothing U.S.”

As the brochure also noted, the “coins” had staying power as an investment.

“The beauty of these, as with many foreign proof sets is that they never go down in true value. They can’t go down because they’re worthless to begin with.”

Besides its own currency, Purple Shaftieuland had another vestige of statehood, a national anthem. Kolasa helpfully provided it on the brochure so all coin owners could sing proudly the refrain, which ends thusly:“When these sets stop selling, and income does refrain, we’ll form another nation, and do this all again!”

Though the Purple Shaftieuland coins were created to serve a point, many of these issues are just all about fun. Consider Bermania, a place known to dealer Allen Berman and a few others.

The “kingdom” has a long history, as detailed by Berman, who created a flag, crowns, titles of nobility and other trappings of a monarchy.This, naturally, includes “coins.”

The first issue was a hand-hammered piece in the style of a medieval coin, struck on a tree stump and with crude lettering and designs.Another piece is celebratory, marking the “royal wedding” of King Alanus I to Queen Barbara.

The most recent issue is a Bermanian horse cart token, which is good for one ride “anywhere in Bermania.” Good luck redeeming that token!

The “coins” of Purple Shaftieuland were alternately described by Kolasa as “transportation tokens” because “you buy and get taken for ride.”

Micronations are a vast and interesting area, and are popular among some collectors. Dealer Anderson stocks any number of unofficial,fantasy issues, and an organization called the Unrecognized States Numismatic Society flourished as little as five years ago.

It’s not an area necessarily popular with serious students of American coinage history, but that isn’t the point — in most cases, it’s all about making the hobby fun.