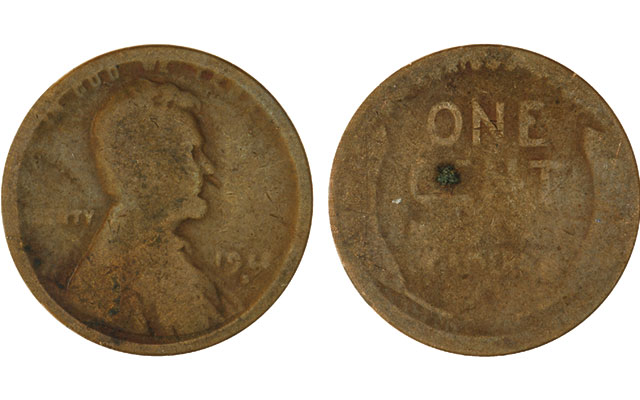 On this Lincoln, Wheat reverse cent found in a recent day's change, the date is essentially illegible and both sides of the coin are worn pretty smooth. That leaves the possibility the coin was minted in a very special year. What year would you like to imagine?

There’s still something alluring about finding an old “wheat penny” in circulation.

As I started my day one morning recently, I grabbed the change from the previous day’s travels and discovered that an old Lincoln cent with those familiar ears of wheat had somehow slipped in without notice.

Usually observant of my coins, I must have been harried as I slipped the change into my pocket the day before, and been too tired at the day’s conclusion to pay attention to the antique artifact.

Like many coin collectors, one of the reasons I love this hobby is the ability to be transported through time to when the coin was issued and consider where it has been, and who has used it as spending money all this time.

That task is a bit harder with this particular coin, since the date is essentially illegible. Both sides of the coin are worn pretty smooth.

The first two digits — the obvious ones — are still discernible. It’s those last two digits that prove the most vexing. The dates that my mind sees the most end in 23, 25 or 28, but that could be a mirage.

The Mint Mark, however crude, indicates that the coin was struck in San Francisco.

I’d like to think that the coin was struck in 1927, the birth year of my maternal grandmother, who played a large role in my early collecting journey.

My only “three-cent nickel” came from her, when I was maybe 12 years old. Knowing that I had been bitten by the collecting bug, she allowed me to rummage through a pile of wheat cents and other strange coins that I had never seen outside of the “Red Book,” picking out ones I needed to fill an album or build my nascent cache.

“What do you want for them?”

“Just give me face value,” she offered.

So, mistaking it for a dime, given its color and size, I paid 10 cents for the 1865 coin. That was the first year of issue, and the most common date, for the denomination and design type.

Both numismatically and sentimentally, it’s worth far more than I ever paid for it. And I still have it!

Though the date on the Wheat cent could very well be another year, I like to think it has special meaning, despite its wretched condition.

In fact, the reverse of this newfound cent is worse than the obverse.

The denomination ONE CENT is still visible, but the wheat? It’s almost completely harvested. The remnants of the legend E PLURIBUS UNUM resemble what you might hear someone say right after oral surgery.

That might explain why it was still slipping by in circulation.

So what is it worth?

A cynic knows the cost of everything and the value of nothing, right? Well, maybe that saying should be flipped to say that a romantic values everything far beyond its cost.

In commerce, the smooth cent is worth at least a cent, of course, but the value of a memory from my early collecting days can’t be quantified.