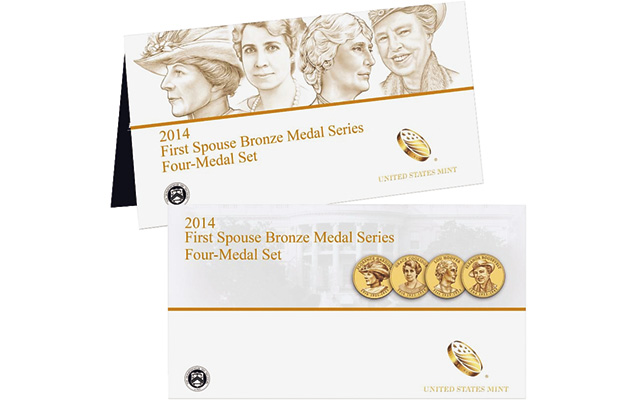 There are few U.S. Mint products that I look forward to annually with fervor, and chief among these is the annual First Spouse Bronze Medal Set.

When the program began in 2007 as a corollary to the much more expensive gold coins, I found a blank Dansco album and blank pages to cobble together a meaningful way to collect and display these medals. Every year when my local coin club placed an order, I made sure to order a set, eagerly anticipating the chance to better learn the stories of First Spouses and/or contemporary coinage designs as new medals were released.

The recent and rapid sellout of only 7,500 sets of 2014 medals has rendered that effort moot.

After a few weeks, the sets sold out, despite never before previously having a mintage limit. Today, those sets are selling for three to six multiples of the $16.95 issue price.

The quick sellout caught myself—and many other collectors—off-guard, and left us scratching our heads.

The fact that several sets from previous years remain available at the Mint website, even at this writing, certainly lulled me (and probably other collectors as well) into believing that the 2014 set would remain available until we were ready to place an order for other items.

Shortly after the set was listed at the Mint website as “out of stock,” a fellow coin club collector called Mint customer service and was told that more sets would be made. I called a regional Midwestern dealer that has served my family for several decades, and who has carried the sets from the beginning, and a representative there told me the same story, that a Mint customer service agent told them that more sets would be made.

Paul Gilkes, Coin World’s tenacious U.S. Mint reporter, quickly sorted out the situation with his sources at the Mint, only to discover that the set had a previously unreported mintage limit and that no more would be made.

This has created another set of “winners and losers,” as those folks who pounced on the sets are now well positioned to capitalize on the unmet demand.

When the 2014 National Baseball Hall of Fame silver and gold coins quickly sold out, and people began “flipping” the coins for profit, I certainly had no complaints, as those coins had mintage limits that were announced well in advance of the sales period.

Sour grapes may make bitter whine, but this really isn’t a complaint about profit—this rapid sellout means that many collectors will not be able to fill what heretofore had been an inexpensive, educational set with historical implications at a price that even beginning collectors could manage.

The situation with the Enhanced Uncirculated finish Native American $1 included in the 2014 American $1 Coin & Currency Set has rightfully been described as a rare misstep for the U.S. Mint marketing team.

The 2014 First Spouse Bronze Medal Set with a phantom mintage limit, is just as much as misstep, and even more disappointing.

The right thing for the Mint would be to make more 2014 First Spouse Bronze Medal sets, either to a specific limit or to those sold within a specified sales period, with plenty of fair warning for collectors to make plans to get their orders in.

Until then, four empty holes in a brown Dansco album will serve as a glaring reminder of my failure to act, and of the set that now will remain incomplete.