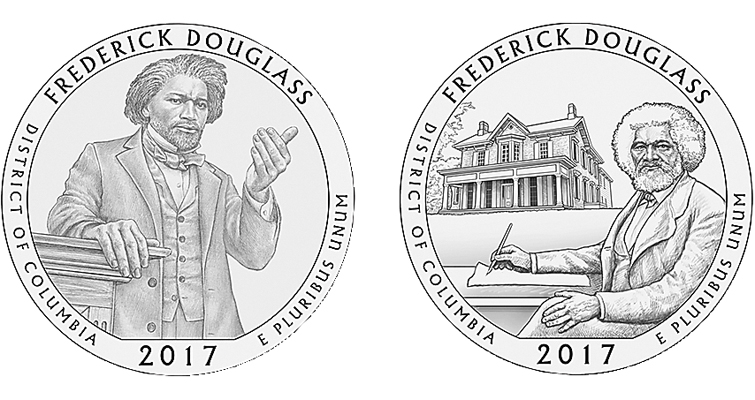 For the 2017 Frederick Douglass National Historic Site quarter dollar, the CCAC recommends a design depicting Douglass orating, while the CFA included his District of Columbia home.

Is there still room for two congressionally authorized panels to both provide advice to the Treasury secretary on what designs should appear on United States coins and medals?

Withdrawing the design review responsibility from the CFA would still leave the panel with an extensive slate of projects to oversee. Doing so for the CCAC would, in effect, all but abolish the panel.

The CFA was established by Congress on May 17, 1910, under Public Law 61-181, to advise the government on matters pertaining to the arts, but more specifically, to guide the architectural development of the nation’s capital.

During its early decades, the Commission of Fine Arts played a leading role in the Renaissance of American coinage that featured designs by sculptors Augustus-Saint-Gaudens, Adolph A. Weinman, Hermon A. MacNeil and many others. Sculptor Daniel Chester French, who sculpted the statue of Abraham Lincoln in the Lincoln Memorial, was a founding member of the commission, serving from 1910 to 1915, including as chairman from 1912 to 1915.

All but one of the CFA’s current seven members are specially qualified in architectural matters or landscape design, with only the chairman, Earl A. Powell III, having an extensive background in 19th- and 20th-century European and American Art and serving as director of the National Gallery of Art since 1992.

The CCAC was created in 2003 as a successor advisory panel to the more than decade-old Citizens Commemorative Coin Advisory Committee (CCCAC) which was abolished under provisions of Public Law 108-15, approved April 23, 2003.

Some members of the CCCAC were held over for service on the fledgling 11-member CCAC, which was given extended advisory powers beyond those of the CCCAC.

While the original committee only addressed matters pertaining to U.S. commemorative coins, the CCAC’s members consider designs and themes for all U.S. coins and medals, but not insignia.

The 11-member CCAC is appointed by the Treasury secretary, with four members recommended by congressional leadership from both houses. The remaining seven members are selected from the general public and those with special qualifications in American history, museum curatorship or numismatics.

The design process can be dragged out longer if one or both advisory panels reject the designs provided for consideration, choosing not to recommend any to the Treasury secretary or his designate for final approval.

During its two-day meeting Oct. 7 and 8, for example, the CCAC rejected all of the designs proposed for the 2017 Effigy Mounds National Monument quarter dollar for Iowa as being unsuitable. The CFA followed suit with its rejection of the same designs Oct. 15, one of the few times both panels agreed.

Out of those same sessions came two different design recommendations for the reverse of the 2017 Frederick Douglass National Historic Site in Washington, D.C. The CFA, arguing the design was about the site, opted for a design depicting Douglass, but with special focus on his historic home.

The CCAC’s recommendation was for a design featuring Douglas, alone, orating in front of a lectern.

Removing the CFA’s responsibility of coin and medal design review would still leave that more than century-old panel with its primary mission of architectural oversight in the nation’s capital.

Is it really necessary to have two separate panels rendering opinions, from 18 combined panel members, or can reasonable review be accomplished with just one panel?