Kennedy half dollar in circulation 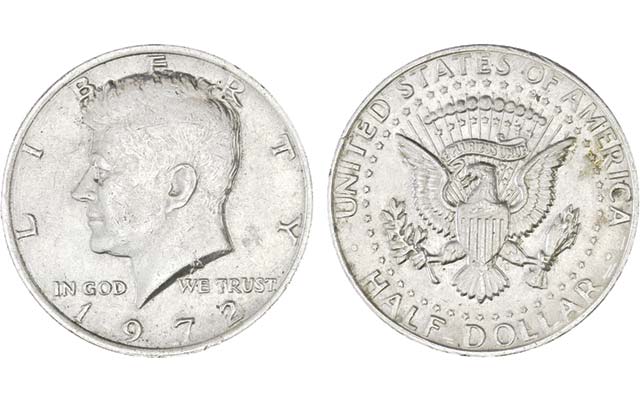 This well-circulated 1972 Kennedy half dollars was received in change May 30 at a concession stand at Ohio Stadium in Columbus, Ohio, before a Rolling Stones concert.

How often do you come across a Kennedy half dollar in circulation? I’ll bet not very often.

In fact, despite being Coin World 's senior editor for U.S. coins, I haven’t seen a Kennedy half dollar in circulation or received one in change for years.

That is, until May 30, in, of all places, Ohio Stadium, home to the national champion Ohio State Buckeyes football team.

I was attending with my girlfriend the Rolling Stones Zip Code tour, among the tens of thousands other rock and roll fans at the Columbus concert venue, when the need to take advantage of the overpriced concessions took hold.

All of the food and drink items were priced in even dollar amounts or in 50-cent increments.

I was actually slightly dumbfounded when the concession worker handed me a well-circulated 1972 Kennedy half dollar in change.

I asked her how often Kennedy half dollars are dispensed in change there, versus quarter dollars or any combination of minor coinage.

She replied that all transactions requiring 50 cents in change are presented in the form of a Kennedy half dollar. The cash register was full of them.

Federal Reserve Banks and contracted armored carrier coin terminals are likely still stockpiled with the bags of Kennedy half dollars that were struck and released into general circulation before 2001, when the Fed stopped ordering them and the Mint stopped producing them for circulation.

The next time you attend a stadium rock concert or sporting event and you’re due change of less than an even dollar amount, you might be surprised what you’ll receive.