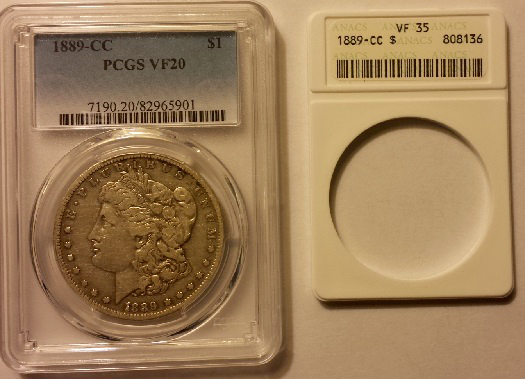 This ANACS Very Fine 35 1889-CC Morgan $1 crossed over at VF-20 when submitted to the Professional Coin Grading Service.

The conventional wisdom holds that modern-day third-party grading is inflated. I have always been suspicious about that conjecture because it is based on individual anecdote. I have always held that grading in the latter 1980s was, instead, inconsistent. There are over- and undergraded coins, with the rest graded to today’s standards.

Sometimes it seems all that we remember are today's over-graded coins. Most undergraded pieces have been resubmitted to the major holdering companies, leaving slim pickings for hobbyists.

I still made a profit, as I scored the ANACS coin for about $600.

When I got it, I saw that it was overgraded, but I took my chances anyway, hoping for a VF30. Here’s an example of what that looks like in a PCGS holder. Such a coin is worth about $1,000 according to recent auction prices.

Still, I felt sure my coin would grade at least VF-25.

When the coin was returned graded even lower than that, I conceded that PCGS was probably correct, preferring the more conservative grade. The coin does have significant wear.

I won’t crack it open and resubmit.

I share this as an example of not believing the conventional wisdom about old-holder grading. Small ANACS holders contain some of the earliest graded coins, and those often are overgraded.

If you keep in mind that inconsistency is part of the subjective grading process, you won’t get your hopes up when the grading is down.