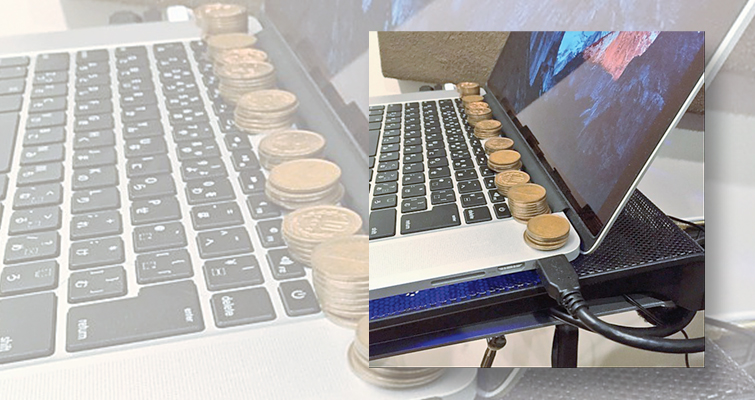 This blog usually ends with the fifth item, but when I thought I was done, a sixth – really modern – non-numismatic use for coins turned up.

Copper coins placed on a laptop can disperse heat, making the computer easier to handle.

On Nov. 2, 2015,Akinori Suzuki, a musician from Kanagawa, Japan, Tweeted a photo of his MacBook Pro laptop with about 50 copper 10-yen pieces placed where the keyboard meets the display.

He wrote, “People who are having trouble with their MacBook Pros getting too hot and not cooling down should gather up all the 10-yen coins they have lying around the house. The copper in the yen is a better conductor of heat than the aluminum in the computer and is good at letting the heat escape.”

The Tweet went viral among the computer gaming community and was picked up by newspapers around the world in June. Copper yen became pennies in England and pre-1983 copper cents in the states.

Techworm.net showed a thermal scan of a MacBook Pro computer showing the area at the top of the keyboard and the bottom of the display was very hot.

The website noted, “He (Suzuki) chose copper coins because copper has much greater thermal conductivity than aluminum or plastic – which most laptops are made out of. Suzuki worked on the laws of thermodynamics and used it on his laptop. Essentially it means that if the copper coins you stack on your laptop are cooler than the laptop itself, the copper coins start soaking up the heat to balance themselves with the laptop.

“Suzuki’s brilliant hack worked and the copper coins ‘soaked up‘ the heat that would otherwise be causing issues for his laptop’s central processing unit.”

The hack does not work with modern copper-plated zinc cents, but it’s a great way to get some use out of the older cents in your coin jar.