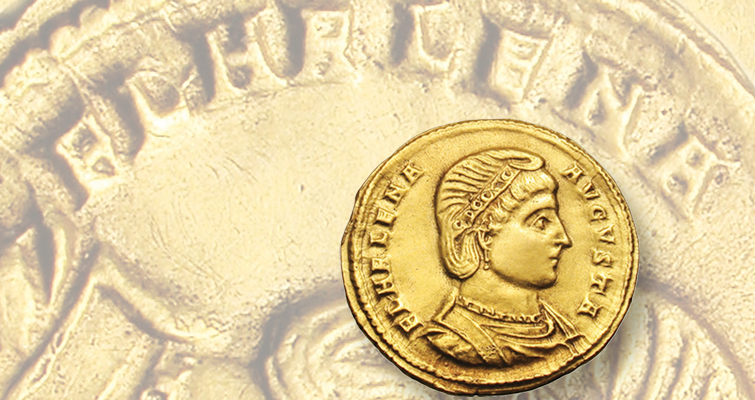 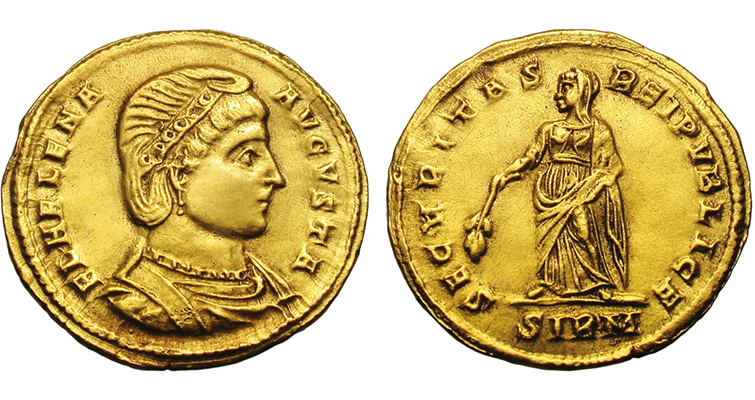 This gold solidus minted at Sirmium (a city in Pannonia, an ancient province of the Roman Empire) in 324 or 325 features Constantine the Great's mom, who is now revered as a saint in some circles. This coin sold for $29,900 in 2011, but other coins depicting Helena from her lifetime can be found for as little as $5 to $10 each.

Like her son, St. Helena, mother of Constantine the Great, is revered as a saint, too, for her charity, devotion and discovery of the True Cross upon which Jesus of Nazareth was crucified.

Helena was born about 248 and worked as a young woman in her father’s tavern in Naissus. It is unknown whether she was wife or concubine to Constantius I, but she bore him a child who would become ruler of the Roman world.

About 312 she converted to Christianity.

Roman historian Eusebius Pamphili wrote, "Especially abundant were the gifts she bestowed on the naked and unprotected poor. To some she gave money, to others an ample supply of clothing; she liberated some from imprisonment, or from the bitter servitude of the mines; others she delivered from unjust oppression, and others again, she restored from exile.

“While, however, her character derived luster from such deeds as I have described, she was far from neglecting personal piety toward God. She might be seen continually frequenting His Church, while at the same time she adorned the houses of prayer with splendid offerings, not overlooking the churches of the smallest cities. In short, this admirable woman was to be seen, in simple and modest attire, mingling with the crowd of worshipers, and testifying her devotion to God by a uniform course of pious conduct.”

In 324 she traveled to Palestine to search for places sacred to the memory of Jesus, building churches at the sites of Christ’s nativity and the ascension into Heaven and discovering, according to legend, the true cross.

The Shrine of the True Cross, a Catholic shrine in Dickinson, Texas, relates, “Then, on Sept. 14, 326, Emperor Constantine’s mother, St. Helena, found in Jerusalem the True Cross on which Jesus was crucified. The legend of the story of the discovery of the True Cross is that when visiting the holy places in Palestine, St. Helena was guided to the site of the Crucifixion by an aged Jew who had inherited traditional knowledge as to its location.

"After the ground had been dug to a considerable depth, three crosses were found, as well as the superscription placed over the Savior’s head on the Cross, and the nails with which He had been crucified. The Cross of the Lord was distinguished from the other two by laying the crosses on a dead youth who was revived by the touch of the third Cross.”

Lifetime coins of Helena are plentiful and cheap, too. They typically show her on the obverse and a star or Securitas on the reverse. They can often be found for as little as $5 to $10 each.

Next: Putting a halo on a crown