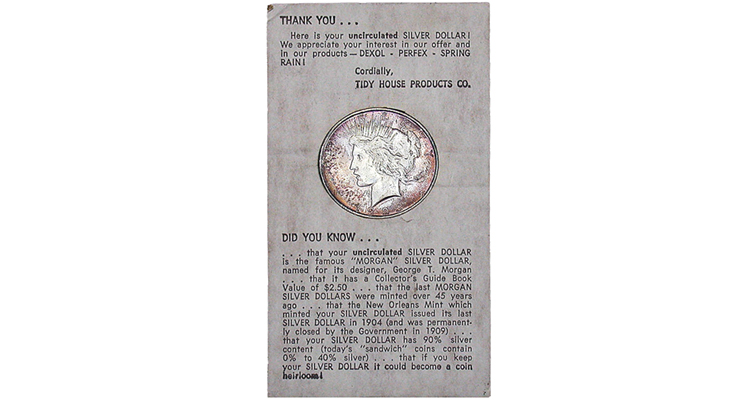 This 1923-D Peace dollar was offered recently in an online auction, displayed in packaging that identifies the former occupant as a Morgan dollar. See enlarged text in next image. 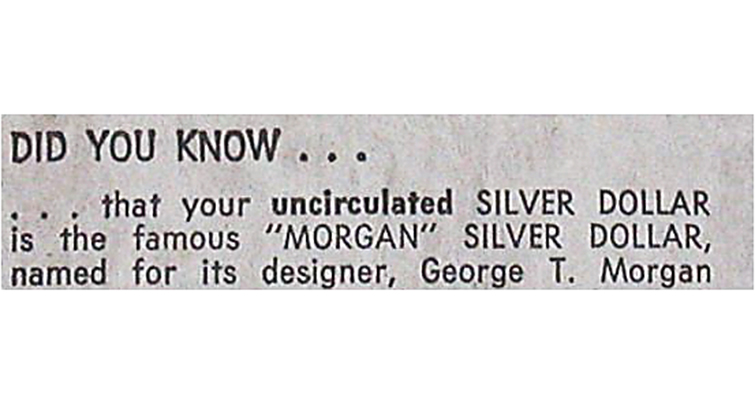 Text from packaging indicates the original coin was a Morgan dollar, but it was likely swapped out, replaced with a less pleasantly toned Peace dollar.

Last year I blogged here about a toned Peace dollar in a Tidy House cardboard holder and cautioned viewers to be careful about swapped-out coins, in this case, replacing a Morgan dollar.

The Tidy House advertising states: "DID YOU KNOW ... that your uncirculated SILVER DOLLAR is the famous "MORGAN" SILVER DOLLAR, named for its designer George T. Morgan?"

As you can see, the coin being auctioned in the Tidy House holder above is a 1923-D Peace dollar, which was not designed by Morgan but by Anthony de Francisci.

Peace dollars do not tone well, when they do tone at all. Tidy House Morgan dollars, in their original packaging, interact with those cardboard holders, causing many to tone in spectacular colors. Most of these dollars are common-date 1880s coins, often from the New Orleans mint.

In the 1960s, Tidy House got its coins from U.S. Mint, purchasing $1,000 Morgan dollar bags at cost for an advertising premium.

Tidy House also had promotions for the 1964 Kennedy half dollar, and those also tone well. Unethical sellers take out those toned halves, too, and replace them with untoned or damaged ones for resale.

Why would someone tamper with a Tidy House coin package? The motive may be money. They can take out the colorful Morgan and replace it with an artificially or questionably toned Peace dollar. They keep or sell the toned Morgan and count on hobbyists being willing to pay high prices for a potentially rainbow-toned Peace dollar, because they are so scarce.

Coin World often covers toned Peace dollars that sell above their condition value, as when a 1926 toned example at MS-65 sold for $1,292.50 at a Stack’s Bowers Galleries’ 2015 Baltimore Expo auction.

To be fair, I do not know if the Peace dollar depicted above is artificially toned. But it’s questionable. On the bright side, perhaps a collector took out the Morgan and replaced it with a Peace dollar and the cardboard genuinely interacted with it over a number of years.

Someone will take the bait, I’m sure. I’m also sure that I won’t bid on it.