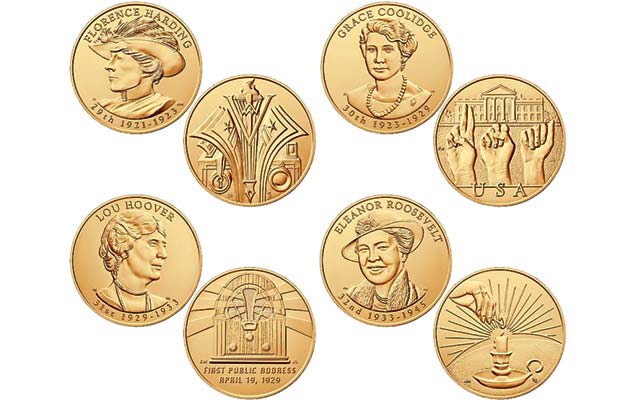 U.S. Mint's "out of stock" label has caused confusion on items including the 2014 First Spouse medal set.

This is a new blog on modern numismatics.  It aims to inform the modern coin collector about important issues and developments. I think that to get the most out of any aspect of numismatics you need to keep abreast of what is going on.

Q. David Bowers famously said “buy the book before the coin,” which is sound advice, but in an area of numismatics that moves as fast as modern coins, you may not be able to wait for the book, and that is where blogs like this can help.

My commitment is to you, the modern coin collector. Since I also know many people who are into modern coins are also bullion investors, I will also discuss precious metals issues.

But the main focus will be on the two key areas of modern coin collecting, namely, modern U.S. coins and modern world coins.

I will also be discussing developments at the U.S. Mint and other major world mints.

Last year the U.S. Mint implemented a major overhaul of its web site and order management system.  This has enabled the Mint to process and fulfill most orders much more quickly than in the past.

However, there is a problem with the way the new site tags certain items as being backordered and out of stock.  Sometimes an item is marked as backordered or out of stock and cannot be ordered, while in other cases it can, and the same item may be marked one way one day and another way the next.

This is creating confusion for collectors and creating temporary secondary market premiums for items such as the 2014 First Spouse four-piece medal set.

When that set was first offered for sale, only a limited number of sets were made available.  They sold quickly, which resulted in the sets being sold for huge mark-ups soon after. Then on Feb. 10 the sets were again briefly in stock, and sold out again in less than a day. It remains unclear whether or not they will be offered again.  In the meantime the market price has dropped from about $200 a set after the first batch sold out to half as much.

This also happened with the 2014 Native American Coin and Currency sets, which were offered several times with no clear indication of whether or not they were coming back.

Yet other items such as the 2014 American Platinum Eagle proof coin have been listed as out of stock for months and have not been made available again, making it likely the coin is sold out.

My understanding is that the Mint is trying to avoid situations that arose previously when coins were ordered but not shipped for months. However, it appears they are often producing products batches that are too small for many products, which means they quickly sell out of existing inventory, and then buyers have to wait for more coins to be produced. So the order fulfillment delays have simply been replaced with delays to order products.

It would help a lot if the Mint implemented a more consistent approach so that buyers can more accurately gauge whether a particular item will be offered again.