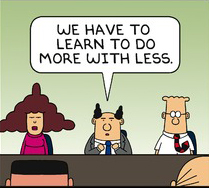 When Dilbert’s boss says, “We have to learn to do more with less,” nothing good happens to Dilbert in this Feb. 11, 2013, comic strip. With coins, though, less can be more. Copyright 2013 Scott Adams Inc / Dist by Universal Uclick

You’ve heard the phrase, maybe even bought into it.

In the workplace, though, duck your head when your boss babbles the chant, often in conjunction with some blather about right sizing.  Less is more, means less money for you, more for him.  If you’re lucky enough to be on the right size of a corporate right-sizing, less is more means more work for you with fewer co-workers to share it.  In the corporate world less is never really more. Only more is more.

However, in numismatics, sometimes less is more.

Some coins and pieces of paper money are worth more because of what’s missing, not what’s there.  For the next few weeks, Five Facts will be exploring five numismatic items that are worth more than their full-bodied counterparts.

Next: The case of the missing signature