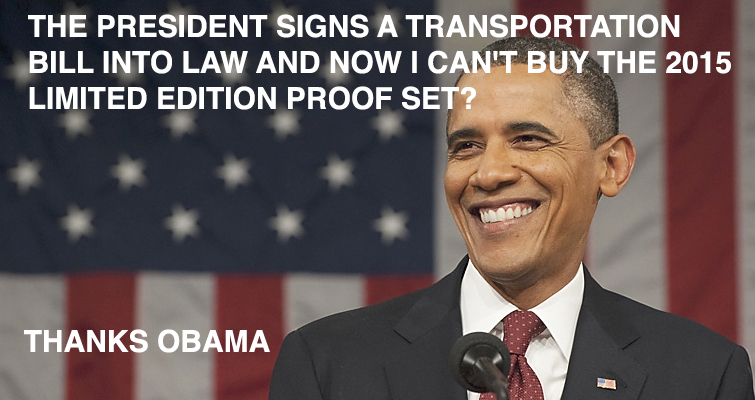 President Obama’s signing into law a transportation bill with several numismatic provisions had some intended and unintended consequences — namely, a decision by Mint officials to not sell the planned 2015 Limited Edition Silver Proof set. (And please, don’t take the image too seriously; it’s meant to be funny.)

?Call it bad timing, bad planning or the law of unintended consequences, or maybe a combination of all three factors. The Mint has announced that it will not offer the previously announced 2015 Limited Edition Silver Proof set — not because the coins aren’t available, and not because the packaging issues that led the Mint to postpone its intended Nov. 23 release can’t be resolved, and not because the Mint has reservations about issuing a 2015 set in 2016 (the 2014 set wasn’t released until 2015).

Mint officials instead made the decision to not issue the 2015 Limited Edition Silver Proof set because of the five-year $305 billion highway bill that President Obama signed into law on Dec. 3.
Why would a transportation bill lead the Mint to cancel what was becoming an annual set?
The 2015 Limited Edition Silver Proof set was to have contained a Proof 2015-W American Eagle silver dollar and 2015-S examples of the Roosevelt dime, all five America the Beautiful quarter dollars, and the Kennedy half dollar. All of the coins were available and the Mint was attempting to solve “packaging issues” for the set. The Mint could have resolved those “issues” and then released the 2015 set sometime in 2016.
However, the transportation act that was signed into law included several provisions related to the nation’s coinage. Among them is a requirement that all Proof and Uncirculated American Eagle silver dollars issued in 2016 must have a special edge inscription recognizing the 30th anniversary of the coin. The key word in the provision is “issued.” Mint officials have interpreted this as meaning that even the existing 2015-W American Eagle silver dollars cannot be released in 2016 because they already are struck and have a reeded edge. It doesn’t matter that the coins would be dated 2015 — they can’t be issued in 2016 because they don’t meet the edge lettering requirements outlined in the legislation.
Had the Mint not experienced “packaging issues” that delayed the release of the set, it could have gone on sale Nov. 23 and then been taken off sale on Dec. 30, possibly creating a modern rarity for those fortunate to have purchased one or more. However, with the passage of the transportation bill, this set will apparently never be released.
Unintended consequences, indeed.