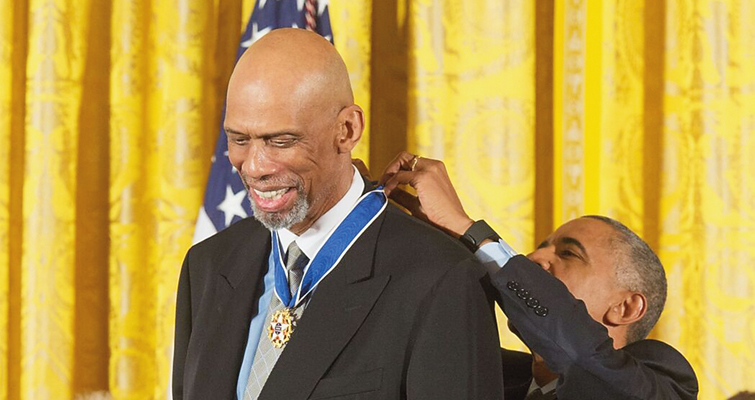 Kareem Abdul-Jabbar received Presidential Medal of Freedom from President Obama on Nov. 22, 2016. Abdul-Jabbar, a coin collector, has been named to the Citizens Coinage Advisory Committee.

?The appointment of Kareem Abdul-Jabbar to the Citizens Coinage Advisory Committee was an inspired decision at several levels.

Abdul-Jabbar, of course, brings to the panel star power that the CCAC has never had before. He literally is one of the most-recognizable persons on the planet. While current members like Dennis Tucker and Heidi Wastweet are well known in the insular worlds of numismatic publishing and medallic art, they are not household names to most of the rest of America. Indeed, the Citizens Coinage Advisory Committee itself is one of those tiny government panels that, while performing an important role, is virtually unknown outside of the immediate community that it serves. Ask a thousand random people what the CCAC does, and it is likely that 999 of them will not know. Ask those same thousand people to identify Kareem Abdul-Jabbar and 999 will likely know.

His service on the CCAC holds the potential to increase the panel’s visibility by a significant factor. When the CCAC meets in a hobby-friendly setting outside of the nation’s capital, like at an American Numismatic Association convention, it can draw a crowd of a few dozen collectors. Imagine, however, the kinds of crowds that could arise if it is announced in the days before that the basketball legend will be in attendance at the convention. To see someone like Kareem Abdul-Jabbar appearing before a crowd of young people who never before thought about collecting coins and hear him say that coins are cool and that collecting is fun — well, the benefits to the hobby could be immense.

He also brings something more to the panel. As he says in our interview starting on Page 6, “I will add an element of diversity in suggesting how America is remembered, as well as how those overlooked people of color who helped build America are remembered.”

The CCAC, an offshoot of the original panel formed to advise the government on commemorative coin programs, is intended to give a wide swath of Americans a say in what our coins and medals look like. Kareem Abdul-Jabbar will add his own distinctive voice and outlook to that panel.

“I’ve spent the last twenty years writing books and articles that celebrate overlooked people of color who have had an extraordinary impact on American culture,” he told Coin World. “So, it seemed like a perfect fit.”

He appreciates the strides that have been made, praising the bold choice that the Mint and the CCAC have made with the 1792–2017-W American Liberty gold $100 coin — the first U.S. coin to depict Liberty as an African-American woman. He calls it “a fitting symbol for the 225th anniversary of the U.S. Mint.”

His first CCAC meeting is set for Feb. 15, a teleconference at which the panel will discuss design themes for the 2019 America the Beautiful quarter dollars. His first in-person meeting will be in March. Like most of the hobby, I’m looking forward to his insights