6 things to know about America's Thanksgiving coin, the Pilgrim Tercentenary half dollar 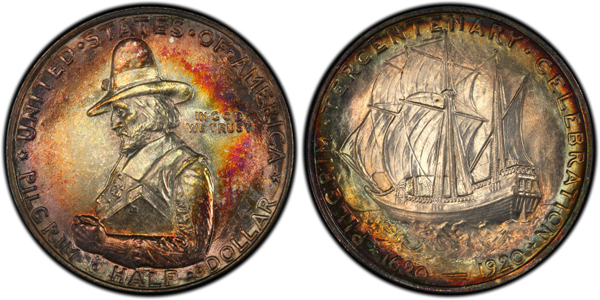 The Pilgrim Tercentenary half dollar was a two-year issue produced in 1920 and 1921.

Thanksgiving is approaching, when many Americans chow down on turkey, mashed potatoes and cranberry sauce and reflect on the peace and harmony between the Pilgrims and Native Americans during the inaugural feast at Plymouth Colony.

Yes or no, some collectors of early U.S. commemoratives don’t need the stuffing and pumpkin pie to be reminded of those early settlers, because they have a Pilgrim Tercentenary half dollar or two.

Here are the basics on the most Thanksgiving-y coin around:

1) When was the Pilgrim Tercentenary half dollar issued?

The Pilgrim Tercentenary half dollar was a two-year issue produced in 1920 and 1921, 300 years after William Bradford and his Puritan Separatists landed in Plymouth Colony, which is now the Cape Cod area.

The anniversary dates 1620 – 1920 appear on the reverse of the coins. The second year’s coins have the date 1921 on the obverse to indicate the year of issue, while the 1920 coins lack a corresponding 1920 on the obverse.

Boston sculptor Cyrus E. Dallin designed the coin’s obverse and reverse, with the former featuring “a stylized portrait of Bradford depicted on the obverse of the commemorative half dollar in typical Pilgrim garb, wearing a conical hat and carrying a Bible under his arm," Michele Orzano wrote in a 2000 Coin World article.

The reverse features a rendition of the Mayflower, the famous ship Bradford and the Separatists arrived on.

No, in fact Dallin's version of the vessel was met with criticism, Paul Gilkes wrote in a 1995 Coin World article.

"The Mayflower as it appears on the half dollar, is depicted with a flying jib, a triangular sail set on a stay extending from the head of the foremast to the bowsprit, or jib boom,” Gilkes wrote. "At the time the Pilgrims landed on Plymouth Rock in late 1620, that type of sail had not yet been put into marine use.”

4) How many coins were struck and how many are still around today?

According to Coin World’s Coin Values, a 1920 Pilgrim Tercentenary half dollar is worth between $60 for a VF-20 example and $750 for an MS-66 example.

6) Are there any notable errors?

Yes. In a Collectors’ Clearinghouse column from the July 6, 2009, issue of Coin World, Bill Fivaz focused on the discovery of new stages of a previously identified die crack on the reverse of the 1920 issue.

The first stage is characterized by "a small die crack between the mainmast and the mizzenmast (the aft-most mast) of the Mayflower,” Fivaz writes. It progresses through three more stages into what Fivaz refers to as a “huge” die break.

"This is an interesting and dramatic die break progression, with the later stages of the die break so large that the variety is potentially collectible,” Fivaz wrote.