Three ways to overpay for coins 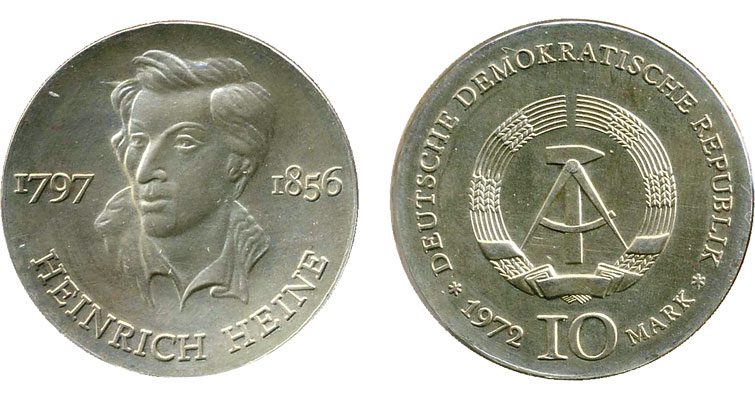 A few months ago, a local coin shop’s “bid board” offered the tantalizing prospect of obtaining a 1972 silver 10-mark coin from East Germany at a fraction of its stated catalog value of $65.

?Recently I explored three ways to make money buying world coins, so now it’s time to discuss the flip side of that notion.

Here are three ways to really mess up when it comes to buying world coins.
Lack of knowledge — on the part of the buyer
Just as knowledge can prove to be an advantage to some buyers, a lack of knowledge can prove to put collectors at a disadvantage.
To wit: it is not enough to know what a catalog value is, for instance, to know what a coin is worth.
A few months ago, a local coin shop’s “bid board” offered the tantalizing prospect of obtaining a 1972 silver 10-mark coin from East Germany at a fraction of its stated catalog value of $65.
There is no shortage of coin pricing guides and catalogs that attempt to capture the value of thousands of coins in multiple grades, but these serve as snapshots of the market at best, and are subject to the biases and experiences of those who compile them.
In this case, the excitement of bidding $20 for a coin worth more than three times that amount was tempered by the hard data — sales on eBay had not approached the catalog value, though there certainly was some “wiggle room” between the bid board amount and the actual retail value.
If I had continued to bid on the German coin based on the stated catalog value, which was way, way higher compared to the actual market, then I could have made an unwise purchase.
Whether the market had moved or the cataloger made an input error or just missed the mark (it happens to all writers and editors on occasion), the catalog showed a value that was way off.
Leaning too heavily on a catalog (or even several pricing references) could put buyers in a uncomfortable position if the market has moved since the publication date.

A moving market
Sometimes, the market moves more rapidly that one expects, and certainly more quickly than an annual catalog can reflect.

The red-hot Chinese market peaked in 2011, with modern and historic rarities selling for hundreds of thousands of dollars, and in some cases millions.
But then the bubble burst.
Prices have stabilized in the five years since then, but never have they approached the gargantuan figures from auctions and bourse sales late in 2010 and for a good part of 2011.
The market for Russian material has lagged in recent years as well, as the eroding price of oil erased the fortunes of many members of the wealthy class.
The military invasion of Crimea and resulting sanctions one year ago have sent the ruble into a spiral, reaching the lowest value against the U.S. dollar in late January 2016.
Dmitry Markov, a U.S.-based dealer of Russian material, noted that the exchange value of the ruble had almost doubled from the 2015 to 2016 New York International Numismatic Conventions, affecting prices for some Russian coins.
“A bronze coin is not a piece of bread — it’s not a necessity,” he told Coin World.
Timing the market can be tricky, whether it’s buying ultra-expensive rarities at auction or stacking silver when it’s $35 an ounce (a pain I experienced several times over!).
An emotional purchase
A third way to overpay when buying world coins is by making an emotional purchase.
We’ve all had that purchase or two that served as a lesson in checking our emotions and patience.
The most vivid lesson for me occurred during a local coin club auction, when I bought a Sidney, Ohio, medal for a famous, local bank.
I just “HAD” to have the medal — though I owned one in copper.
With silver around $25 an ounce, I paid $35 or so. I had never seen one before, and the part of my brain focused on want took over from the logical portion that, rightly, suggested that there would be other examples to come to the market, especially given my proximity to the issuer.
The next month, another example of the medal was offered at auction, perhaps drawn out by the strong bidding the month prior.
With less competition, the piece sold for the medal’s melt value.
When I look at that medal, it is a reminder to step back and remove emotions from the bidding process.
Now that I’ve shared these thoughts on buying and selling coins, I’d love to hear/read your thoughts.