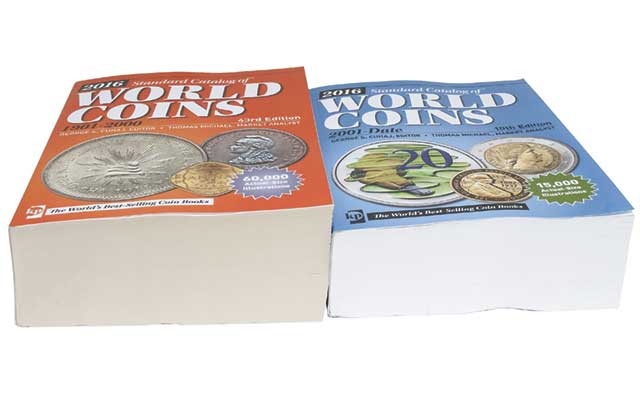 A side-by-side look at two 2016 editions from the Standard Catalog of World Coins series shows how active the market for new collector coins has been in the past decade.

?There may be no better illustration of the explosion in modern commemorative coins than the growth in the catalog that tracks them.

The famous multi-volume Standard Catalog of World Coins series by Chester Krause and Clifford Mishler in modern times features the research and analysis of Tom Michael and, until January, George Cuhaj.

The series tracks worldwide coin issues, a century at a time, from 1600 to the present.

In 2005, the publishers launched the first edition of a reference cataloging coins of the current century. In that time, the book has grown rapidly as the pace of issuance of new collector coins has only intensified.

When the 2016 editions of the 1901-2000 and 2000-present catalogs arrived at Coin World last week, the abundance of new coins was immediately apparent — the books are almost equally thick.

The page counts, though, differ significantly.

However, consider the number of pages per decade covered, and the 2001-present catalog far surpasses the 20th century edition.

Measured that way, it takes 235 pages to cover each decade of coins from the 20th century, but the book for the modern century requires 896 pages per decade, and that’s with only some of the 2015 coins included, since more continue to be produced daily.

It’s a startling tell on the glut of modern issues in the market.

For purists, the Collecting World Coins book is also regularly updated, focusing on coins issued with the intent to circulate and rejecting the collector-oriented products.

Mints clearly are adopting a “Long Tail” approach to the business — issuing an increasing number of coins targeted at narrower and narrower niches — but the resulting outpouring certainly keeps collectors, the marketplace, and even catalog editors, scrambling to keep up with it all.