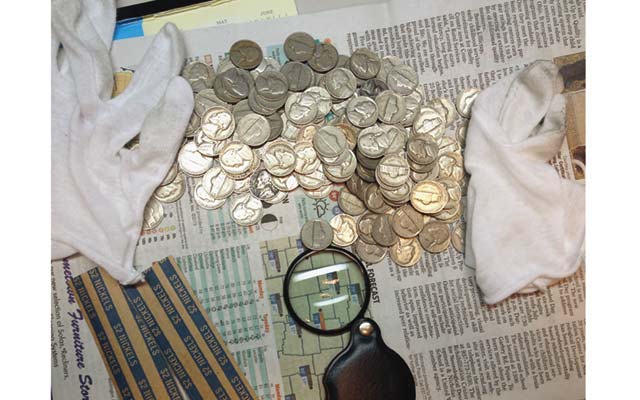 If someone told you that you could make a 20 percent return with absolutely no risk of losing money, you’d probably think you were talking to a would-be Bernie Madoff.

But, the reality is, that prospect exists with Jefferson nickels.

We’re not talking about the ones with full steps. You don’t need to buy Bernard Nagengast’s The Jefferson Nickel Analyst book to study the series. The reward is for something as easy as hunting for examples issued before 1960.

Dealer Wayne Herndon in Virginia is one buyer willing to pay six cents for pre-1960 Jefferson nickels. Certain key dates and the silver examples net a higher return, of course. But Herndon’s offer stands for even the most common years and Mint marks.

I first learned of Herndon’s offer through Wayne Homren, editor of E-Sylum. In the March 15, 2015, edition of the weekly newsletter, Homren recounted a story heard at a recent gathering of collectors in the Washington, D.C., area.

Herndon explained to Coin World his offer to pay 20 percent above face value for these relatively common coins.

“I’m a dealer, and like most dealers I am constantly offered collections, accumulations, etc.  ... Like bags of wheat cents, there is a market for bags of pre-1960 Jefferson Nickels.”

Herndon sorts the coins into bins. After a bin gets full, he’ll run coins through a counter and assemble bags of 4,000 coins ($200 face value).

“Most of this stuff is wholesaled in my case and I have customers who from time to time will ask for bags of pre-1960 [Jeffersons],” he said.

He doesn’t search them for varieties or even date/mintmark combinations that are better, as that is rarely worth the investment in time.

The E-Sylum discussion sparked a memory for me. When I was in high school and college, I worked at a national pharmacy chain found at the corner of happy and healthy.

As a cashier and photo clerk, I soon gained confidence of managers to search through multiple cash drawers daily to buy any coins or paper money of interest.

At some point during my employment, I began harvesting pre-1960 5-cent coins, though my memory is foggy as to the exact reason I fixed on that date for the search. My reasoning then was, these are 35+ years old, and if I wait another few decades, they’ll be even older. The investment cost was certainly the right price — I could always cash them in and not lose any money.

I amassed thousands of these coins, many of which came with me to Ohio when I started at Coin World full-time in early 2004.

The discussion on E-Sylum, and an already fertile desire to winnow down my holdings, sent me searching into the collecting closet, where I found the pile.

I finally sorted through it recently, and tallied the haul.

What remained of my collection (I sold some of the coins when I was in college to pay for my education) totaled $78.95.

Herndon is not alone in offering a premium for the older coins. Nagengast, a local coin club member, pointed me toward a local dealer who pays seven cents for each pre-1957 coin.

That 40 percent return looks less exciting considering that inflation has risen by 43 percent since 1996 (about the first year I started collecting these coins).

Nevertheless, the exercise provided a reminder of my early days as a collector, while offering plenty of exercise in lifting the heavy piles of coins. It also freed up more room in my collecting closet to begin hoarding these coins again.

And if you want six cents for each pre-1957 Jefferson nickel, I know just the buyer!