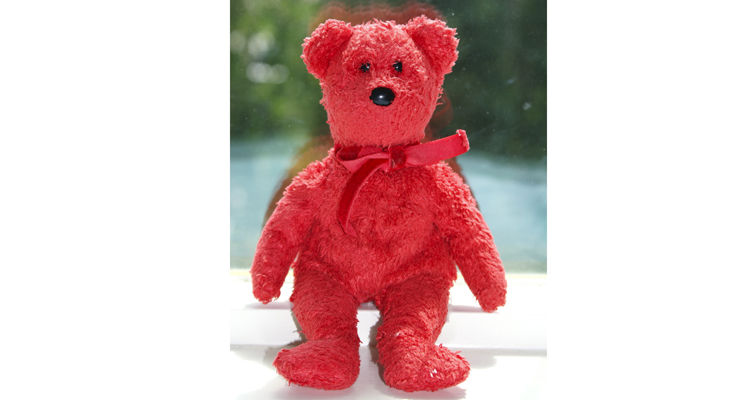 Sizzle the Bear Beanie Baby was released in 2001 and still retails at its $5 issue price.
?In 1999, theater students at Fort Hayes High School in Columbus, Ohio, were raising money for a summer trip to Scotland by holding benefit performances, bake sales, a grand yard sale and even an auction of donated items.
As I recall, I donated some old coins. A lawyer put up a will. Several artists offered their work. What I remember most, though, was a dear girl who placed her Beanie Baby collection in the auction.
Beanie Babies were “the thing” in the 1990s. They were (and still are) hand-size toy animals stuffed with plastic pellets – their namesake beans. Each came with a heart-shaped hangtag. Experts could discern which factory produced the toy and when by deciphering such things as the spacing of the wording on the tag.
Prices skyrocketed as more as more people chased sometimes-elusive versions of the animals. Some were produced for just a few months before being “retired,” in the language of the day. A 1997 “commemorative” bear honoring Diana, princess of Wales, after her death was especially sought after, jumping from an issue price of $5 to several hundred dollars. When McDonald’s offered 100 million tiny versions of Beanie Babies as a promotion for its children’s Happy Meals, adults stormed the stores.
In 1998, the fad’s peak year, Ty Inc. sold $1.3 billion of the toys to retailers.
Les and Sue Fox, known to coin collectors for their “Fortune Telling” silver dollar books of the 1970s, even produced The Beanie Baby Handbook, a catalog that showed number made, issue price, 1998 price and estimated 2008 price.
The Foxes advised, “Basically, if you can afford to do this, simply putting away five or ten of each and every new Beanie Baby in super mint condition isn’t a bad idea.”
The book reported that a 1995 Stripes (The Dark Tiger) toy, issued for $5, was worth $250 in 1998 and would be worth $1,000 in 2008.
In 1999 the Beanie Baby craze went bust. The valuable toys the high school student donated were worth next to nothing by the time of the auction.
Today the toys turn up on eBay with great frequency. Princess Diana bears are priced from 99 cents to $500,000. Of 361 Diana bears listed in early August, only nine had bids. Of the few bears that sell, most go for just a few dollars.
Next: The collectible that smells