Introduce someone to our hobby during National Coin Week 2015 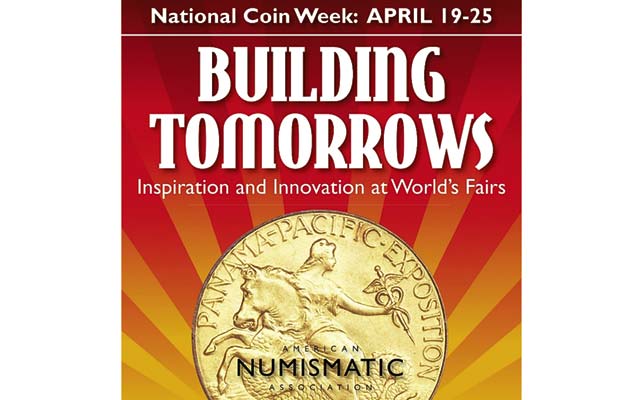 National Coin Week in 2015 is April 19 through 25, and the theme this year is Building Tomorrows: Inspiration and Innovation at World's Fairs.

We get dozens of club publications each month in our Sidney, Ohio, Coin World office.

Reading these gives me a great feel for where our hobby is at the local level, and it’s been refreshing this year to see how many clubs are planning public programming for National Coin Week.

This year’s NCW marks the 92nd installment of this annual event that takes place during the third week of April. It’s organized by the American Numismatic Association and each year has a different theme, meant to inspire discussion and unique programming.

In 2015 NCW takes place April 19 to 25 and is titled: “Building Tomorrows: Inspiration and Innovation at World’s Fairs.”

Kudos to ANA member Esther Leising who submitted the winning theme, as 2015 marks the 100th anniversary of the 1915 Panama-Pacific International Exposition in San Francisco, which is well-known to collectors for the gorgeous (not to mention rare and expensive) round and octagonal gold $50 commemorative coins issued in celebration. There were also 1915-S Panama-Pacific commemorative silver half dollars, gold dollars and gold quarter eagles, as well as a host of other numismatic mementos.

As Jeff Starck noted, “Expositions have a rich numismatic history, from the prize medals awarded to participants or coins and medals struck on the grounds or in commemoration.”

It’s a great topic and local clubs across the nation are planning presentations and exhibits in public spaces including libraries and schools to expand the reach of numismatics.

NCW is one of the many rich traditions that continue to bring visibility to our hobby. The continued viability of NCW is dependent on the generous local clubs and individuals who plan activities to introduce numismatics to new people who may eventually become collectors.