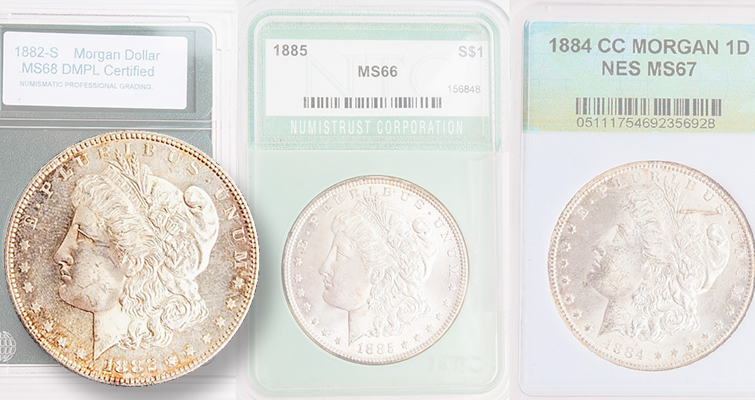 This author's advice: Do not bid based on grades unless coins are holdered by a top tier firm with a good market reputation, such as PCGS, NGC, ANACS or ICG. For example, the 1882-S "MS-68 DMPL" Morgan dollar coin privately slabbed in the photo at left above is no gem of a coin. It is cleaned, stained, finger-printed and maybe About Uncirculated 58, but no deep mirror. In other words, it is basically silver melt.

The lesson here is: In online venues like HiBid where auctioneers typically state all sales being final, a hobbyist has to be an expert grader before bidding on coins in lesser-known holders.

Because of ever-increasing buyer’s premiums in top auction portals like Proxibid and iCollector, online bidders are migrating to portals like HiBid.com where few rules exist governing what auctioneers can say about lots.

In other words, bid at your own risk.

I’ve been bidding on auctions in HiBid.com, to test the portal, and am finding lots in lesser-known holders, often chuckling at grades such as the 1882-S so-called MS-68 DMPL Morgan dollar coin in the photo above (click to expand). Okay, yes, grading is subjective. But this is no gem of a coin, in my opinion. I would grade it as cleaned, stained, finger-printed About Uncirculated 58, no deep mirror. In other words, basically silver melt.

There are no Mint State 68 DMPL coins for this date. Compare the one pictured above with a PCGS MS66 DMPL.

The 1885 MS-66 Morgan holdered by Numistrust Corporation is a different story. You can find good coins in holders by this company. Often they are a tad overgraded (1 to 3 points or so) and sometimes a cleaned or dipped coin is not cited on the label. In the past, though, I have broken out MS-66 coins in Numistrust slabs that actually go on to be graded gem by PCGS.

This 1885 Morgan looks gem. But because I am bidding online and cannot see the coin in person under good lighting, my bid here would be for MS-64, or about $45.

Step back and see why I bid $45 on a potentially $75-150 coin. With buyer’s premium and shipping, I will end up paying an additional $20. If I lose the coin to another bidder, so be it. The $45 bid makes sense. Anything higher is a gamble akin to going to a casino.

Your experience may be different, but I never saw an accurately graded NES coin according to my own standards, based on what you might find at PCGS or NGC. But on occasion, I have bid on NES key-date or scarce coins, knowing that they most likely have problems.

The 1884-CC Morgan in the photo above is definitely not MS-67. It has issues on the cheek and neck with a small stain or distracting tone in the upper right field. What concerns me is the luster (or lack thereof). Again, it is somewhat difficult to tell in online photos, but this coin looks dipped when compared to the luster of the 1885 Morgan discussed earlier.

When unsure of luster on a coin, keep in mind that the same photographer is likely snapping pictures of the coins in an auction. So that is a basis of comparison.

Why then place any bid at all on this NES coin? A cleaned 1884-CC Morgan is still valuable. Most came out of bank bags in U.S. Treasury hoards discovered more than 50 years ago. So if this coin was MS-62 or -63 in its undipped heyday, it would have been worth about $225, or $160 in auction values (typically about 25% less than retail).

Cleaned and dipped, such a coin would sell for about $100. Taking that into account, with shipping and buyer’s premium, I can bid about $70 for this coin.

The lesson here once again is about grading, not bargains. In online venues like HiBid where auctioneers typically state all sales being final, a hobbyist has to be an expert grader before bidding on coins in lesser-known holders.

If you are still learning how to grade, only bid on coins in top-tier holders (PCGS, NGC, ANACS, ICG).