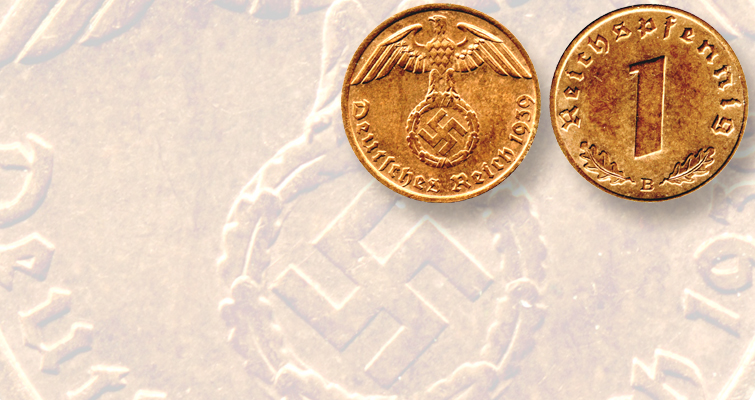 This 1939 Vienna Mint 1-pfennig piece is typical of Nazi coins. It shows an eagle holding a swastika. Hitler appeared on a few pattern pieces, but did not want his portrait on German coins until after he had won the war. 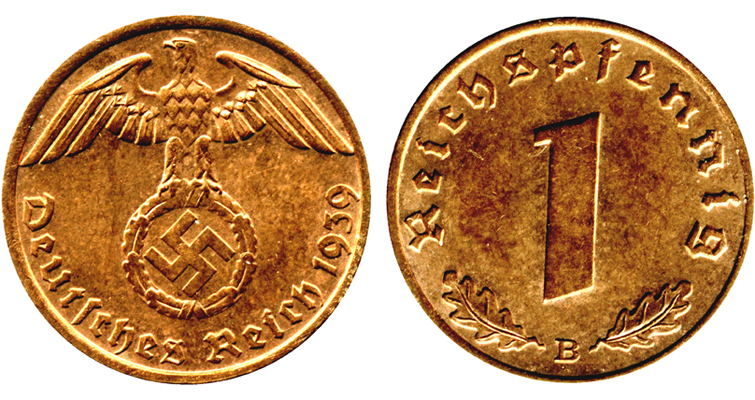 The 1939 Vienna Mint marked 1-pfennig coin, typical of Nazi coins, shows an eagle bearing a wreath framing a swastika. Hitler wanted to wait until after he had won the war before having his portrait on German coins, so although his image appears on a few pattern coins, it never became part of a design on coinage that circulated.

This is the second in a five-post series about Evil People on Coins.

Read the rest of the series: Pol Pot | Joseph Stalin

Adolf Hitler’s face was all over the place in Nazi Germany, but not on coins. The central design element of Nazi coins, by and large, was an eagle holding a swastika. The only person to appear on coins – and only on pre-war coins at that – was Paul von Hindenburg, the German president who appointed Hitler chancellor and signed the Enabling Act of 1933 giving Hitler’s decrees the force of law.

The only wartime coins to show Hitler’s face were patterns produced as part of a 1941 design competition. Hitler, by many accounts, rejected the pieces, saying he didn’t want his portrait to appear on coins until after Germany had won the war.

Hitler’s face also appears on a pair of gold 20- and 100-mark pieces cataloged in Colin R. Bruce II’s Unusual World Coins. These pieces show the Brandenburg Gate surreally topped by a swastika on the reverse.

Bruce notes the pieces were possibly produced in Buenos Aires, Argentina, in 1959 as souvenirs for Nazis who escaped to South America after World War II.

Next: The people’s paradise