Will the U.S ever issue a colorful circulating coin? 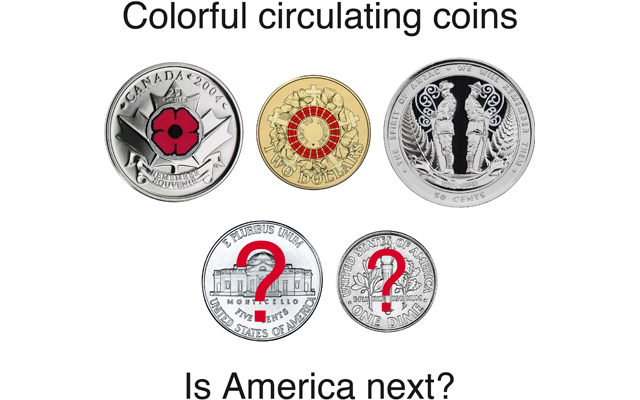 Colorful coins have been entering circulation around the world. Will the U.S. Mint be next? Coin World graphic by Lori Billing.

American collectors looking at the successes of colorful circulating coins in Canada and Australia might yearn for the day that their pocket change features more than the monochromatic steel-gray of copper-nickel or clad metals and the fool’s copper of the mostly zinc cent.

Will the United States ever issue a colorful circulating coin like several other countries have done with success?

Innovation is a hallmark of the Royal Canadian Mint, which was the first mint in the world to issue .999 fine and .9999 fine bullion coins. The RCM was also the first to issue a colorful circulating coin.

And, RCM scientists developed the process for minting multi-ply plated steel coins that have become popular around the world as metal prices have risen the last decade.

The Australian Mint claims some other innovations of its own, being the second mint to issue a convex/concave coin, after the technique was developed by the Monnaie de Paris.

While the U.S. Mint has joined the “curved coin” bandwagon with its 2014 Baseball Hall of Fame coins, it made the technological leap only because Congress said it must do so.

The U.S. Mint should rightfully be praised for extending the technology to copper-nickel-clad coinage for the half dollar (a world first), but the minting floors in Denver, Philadelphia, San Francisco and West Point aren’t noted for groundbreaking innovation.

For Americans, it may be hard to swallow, but America hasn’t been first on coinage technology fronts.

Modern ringed-bimetallic coins have been in use for more than 30 years, with Italy issuing the first such example in 1982. To put it another way, ringed bimetallic coins were already in use in a major European country before Facebook founder Mark Zuckerberg was even born.

However, though hundreds of millions of people in Canada, the United Kingdom, Japan and the eurozone (to name but a few) use ringed-bimetallic coins every day, the closest the U.S. Mint has come is its issuance of a collector coin in 2000, in precious metals.

Changing coin design has become the norm, thanks to the State Quarter program, the Westward Journey 5-cent series and the Lincoln Bicentennial cents, but it’s fair to say the design merry-go-round goes little noticed among the citizenry.

Given the political challenges involved with something as simple as eliminating the 1-cent coin (a feat already achieved around much of the world, including in Canada), the prospect of adding color to American coinage seems downright impossible.

For my money, there’s a better chance that Uncle Sam shows up at the Fourth of July parade singing “O Canada.”