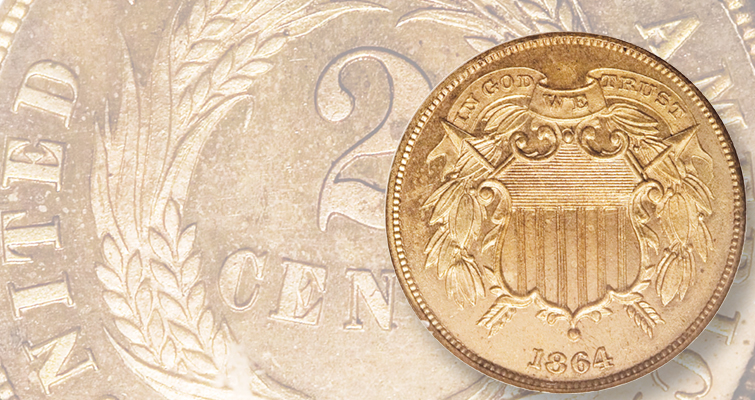 The national motto, IN GOD WE TRUST, first appeared on the 1864 2-cent piece. 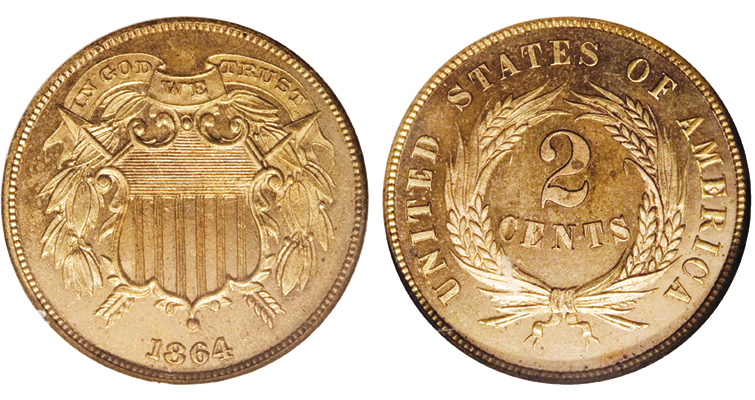 What is now officially the national motto, IN GOD WE TRUST, first appeared on the 1864 2-cent piece, in an emotional response to the Civil War.

In the depths of war, legends on America’s coinage gave substance to our aspirations and the metals used reflected the exigencies of battle.

Coins glorified God during the Civil War, celebrated peace after World War I and honored those unfortunate soldiers who died in the jungles of Vietnam.

During the Civil War and again during World War II the Mint tried new metals to replace those hoarded at home and needed for battle abroad.

We continue a five-part look at the way war has shaped U.S. coinage.

Coinage, even cents, disappeared from circulation at the start of the Civil War. Metal coins were hoarded and traded at a substantial but fluctuating premium to paper money.

In April 1864, Congress authorized a change in composition for the cent and the creation of the 2-cent piece. The cent, which had previously been a nearly 5-gram copper-nickel coin, was changed to a 3.11-gram copper piece.

The 2-cent piece was produced to take the pressure off the cent. Twice as much value for each strike of the press.

The coin was most important, though, for the legend it bore: IN GOD WE TRUST.

On Nov. 13, 1861, Ridleyville, Pa., minister M. R. Watkinson urged Secretary of the Treasury Salmon P. Chase to place a “recognition of the Almighty God in some form on our coins.” He suggested, GOD, LIBERTY, LAW.

“No nation can be strong except in the strength of God, or safe except in His defense. The trust of our people in God should be declared on our national coins,” he wrote.

“You will cause a device to be prepared without unnecessary delay with a motto expressing in the fewest and tersest words possible this national recognition.”

The result was IN GOD WE TRUST. Over the next century, the motto would make its way onto all of the nation’s coins and paper money.