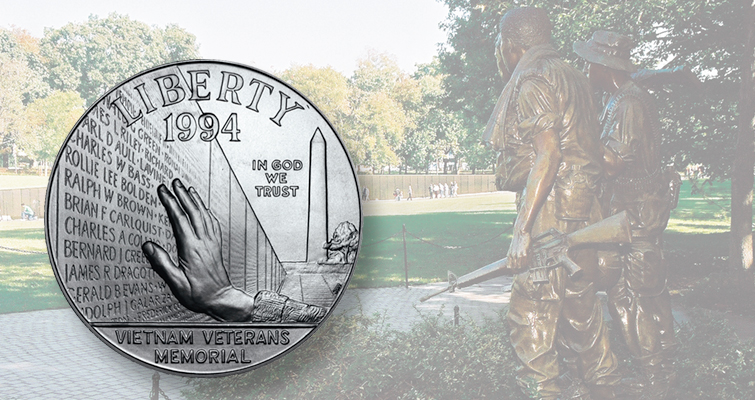 The 1994 Vietnam Veterans War Memorial silver dollar obverse shows a section of The Wall. Across a grassy mall, a sculpture by Frederick Hart is posed as though observing visitors to The Wall. 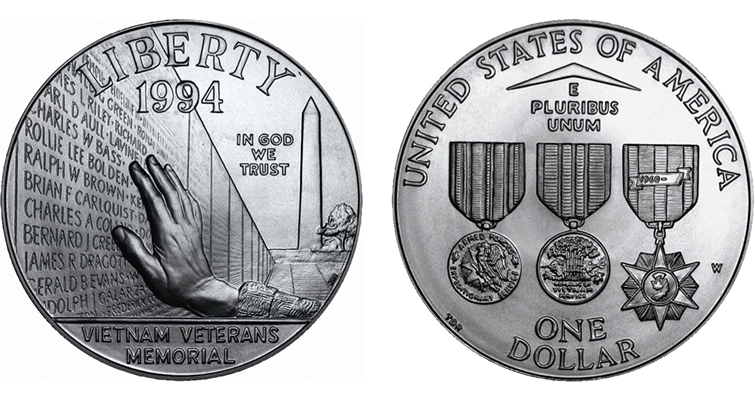 The 1994 Vietnam Veterans War Memorial silver dollar honored those unfortunate soldiers who died in the jungles of Vietnam. The obverse shows a section of The Wall. The coin shown is the Uncirculated version, struck at the West Point Mint. The Proof version was struck at the Philadelphia Mint.

We end a five-part look at the way war has shaped America’s coinage with a look at a commemorative coin to honor those unfortunate soldiers who died in the jungles of Vietnam.

The Vietnam War saw one of the biggest changes ever in United States coins, but the changes had nothing to do with the war.

At the same time American involvement in the South East Asian war was escalating from just a few hundred soldiers in 1959 to more than half a million in 1968, the price of silver was also rising.

Rising demand, especially in the photography industry, pushed prices above 90 cents in 1956 and over $1 in 1961. The death warrant for silver coinage was signed Sept. 1, 1963, when silver hit $1.293 — the point at which a silver dollar contained a dollar’s worth of silver.

In 1965, the Mint ceased production of 90 percent silver dimes, quarter-dollars and half dollars. Some silver would remain in the half dollar through 1970, as U.S. involvement started to wind down.

Our current clad coinage began during the Vietnam War and continues to this day.

Twenty-one years after the last American left Vietnam, the United States produced one of the most democratic coins ever made to commemorate those who lost their lives in war — the Vietnam Veterans Memorial silver dollar.

The 1994 coin shows a portion of Panel 3-East of The Wall, recording some of the deaths of Nov. 15 and 16, 1965. Most of the men whose names appear on the coin fell during the Battle of Ia Drang.

Of 21 discernible names on the commemorative silver dollar, 17 men died at Ia Drang. Sixteen of those 17 died during the 16-hour battle in and near a football-field size clearing called Landing Zone Albany. The battle was the subject of the 1992 book and 2002 movie We Were Soldiers Once ... And Young. Lt. Gen. Harold G. Moore (Ret.), who commanded the 1st Battalion, 7th cavalry in the battle, and author Joseph L. Galloway wrote the book.

“The Ia Drang campaign was to the Vietnam War what the terrible Spanish Civil War of the 1930s was to World War II: a dress rehearsal; the place where new tactics, techniques and weapons were tested, perfected and validated,” Moore and Galloway wrote in the book’s prologue. “In the Ia Drang, both sides claimed victory and both sides drew lessons, some of them dangerously deceptive, which echoed and resonated throughout the decade of bloody fighting and bitter sacrifice that was to come.”