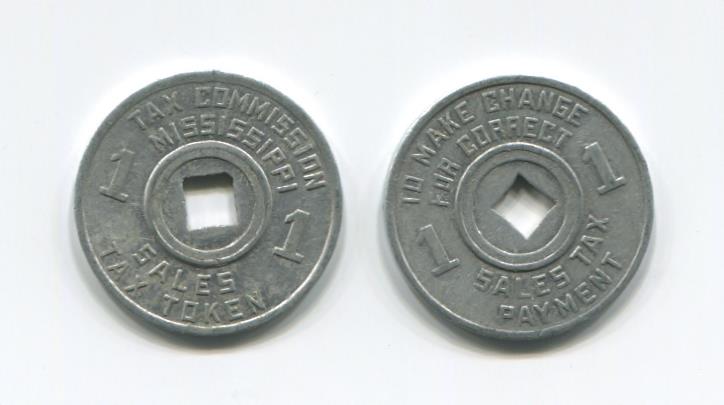 Sales taxes, a regressive form of taxation enjoying new popularity among tax hikers across the country, owe their birth to the Great Depression. As income and therefore income tax receipts fell in the early 1930s, state after state turned to consumption taxes.

A problem, though, quickly developed. While a 1 percent tax on a $1 purchase worked out to an even cent, no smaller coin was available for the tax on amounts of less than $1.

The tokens – tiny in size and tiny in value – proved to be too much of a bother. Most states discontinued their usage before World War II, though Missouri tokens lasted into the early 1960s.

The tokens tend to be simple affairs – often with just the state’s name and denomination. New Mexico’s are noteworthy in that they show a saguaro cactus. Sales tax tokens were made in fiber, plastic, aluminum, zinc and bronze and were often holed.

The tokens are avidly sought after by a small group of collectors – many of whom are members of the American Tax Token Society. Sales tax tokens tend to be junk box material, often selling for a dime or so. Some rare varieties, though, have sold for as much as $500.

Next: Tax on checks