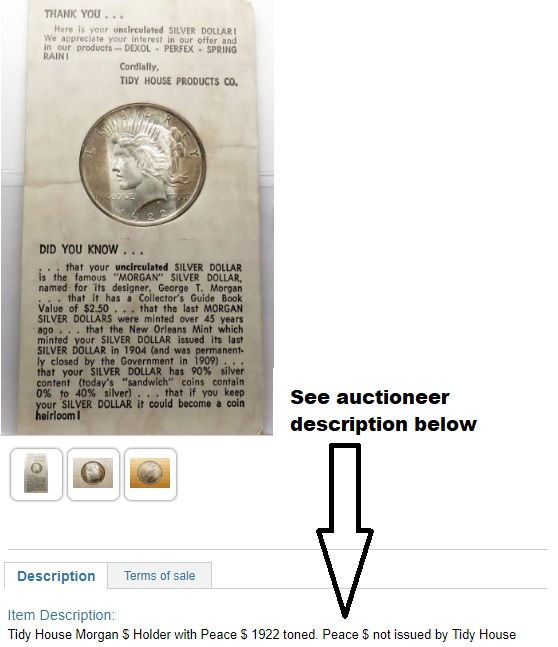 Each year, for good reason, we warn about Peace dollars swapped into Tidy House holders. The unethical practice continues, although this seller at least provides a full and correct description of the offering.

As my editors know, sometimes for the good of the hobby, especially concerning online auctions, I have to revisit an issue more than once to make the point about unethical practices that hurt coin collecting.

I have done this repeatedly with fake California Gold coins, as you can see in this 2016 post and in this 2017 one.

Today the continuing issue is swapped out coins in Tidy House holders.

In this 2016 post, I depicted a Tidy House holder with a Peace dollar, asking viewers if they could tell why the silver dollar was not the original one placed in the promotional item distributed by a cleaning products company in the 1960s.

I noted that the advertising description stated: “DID YOU KNOW ... that your uncirculated SILVER DOLLAR is the famous ‘MORGAN’ SILVER DOLLAR, named for its designer George T. Morgan"?

The Peace dollar in the Tidy House holder was not the coin designed by Morgan but a dollar of a completely different design, by Anthony de Francisci.

In this 2017 post, I identified other sellers putting Peace dollars in Tidy House holders, explaining the motive to do so. Peace dollars, I wrote, “do not tone well, when they do tone at all,” while Tidy House Morgan dollars, in contrast, in that original packaging, interact with those cardboard holders and typically tone.

The toning is what makes “Tidy House dollars” so desirable.

Putting an artificially toned Peace dollar, or one with weak toning, in the Tidy House holder is an unethical enticement to raise bids.

As you can see in the description above, this Proxibid seller (whom I know and respect) made clear that the Peace dollar depicted in this lot had been swapped out.

While I respect that, I do not think sellers should offer Tidy House holders with Peace dollars, period. It’s a matter of reputation. It also protects the hobby.

Perhaps you disagree and can add your perspective in the comment section below.

For the record, original Tidy House dollars should come with the envelope from the company, providing some reassurance that the coins haven’t been swapped out.