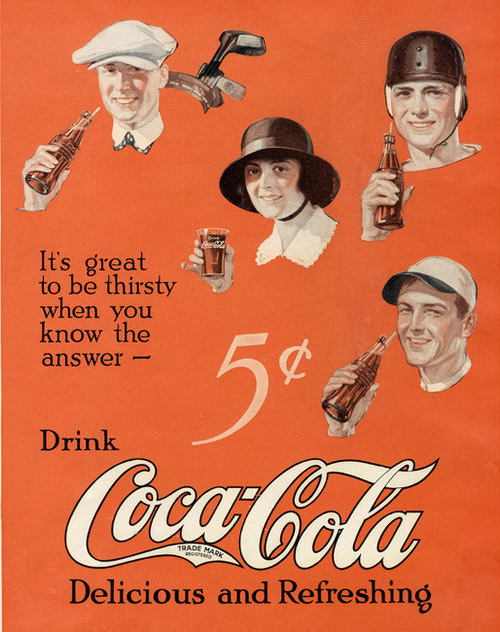 Coca Cola was priced at 5 cents a serving for more than 50 years. This 1922 ad appeared in the venerable Saturday Evening Post.

Coke was a nickel. It was in the 1890s, when the current Coca Cola Co. was incorporated. It was during World War I, the Great Depression and even World War II.

Coke was a nickel. It had always been a nickel and gigantic signs painted on the signs of drugstores and plastered on billboards everywhere declared that price – until they didn’t.

Rising raw materials prices forced the company to rethink its pricing in the late 1940s. But, there were nearly 400,000 obstacles to a price hike. Of the 460,000 vending machines in operation in the United States then, some 85 percent were owned by Coke and all of those were set to dispense a bottle of pop after one coin – a nickel – was deposited.

The machines could not accept more than one coin or give change.

Coke’s options were to double the price of its popular pop to a dime, overhaul the machines so they could either give change or accept more than one coin, or ask the Mint to create a new denomination especially for Coke – 7 ½ cent pieces.

In a 2004 “Journal of Money, Credit and Banking article, economists Daniel Levy and Andrew T. Young report, “Doubling the price of Coca-Cola from a nickel to a dime, i.e. 100% increase, was out of the question. However, a less than 100% increase in the price would require the public to use anywhere between two and five coins to buy a Coke, which could lead to a ‘logistic nightmare.’ [Coke President Robert W.] Woodruff considered this single-coin issue a matter of such significance that he began exploring the possibility of having the minting of a new 7.5¢ coin authorized by the U.S. Treasury Department. ... Woodruff submitted a request in 1953 to the newly elected President Dwight Eisenhower (his hunting companion and friend) to get the U.S. Department of Treasury to mint a new 7.5¢ coin. Eisenhower forwarded the request to the Treasury Department officials, who did not like the idea.”

By 1951, Coke stopped placing the 5-cent price on advertising and started raising prices at soda fountains around the county. The last nickel Coke is believed to have been sold in 1959.

By the 1960s, vending machines typically charged a dime.