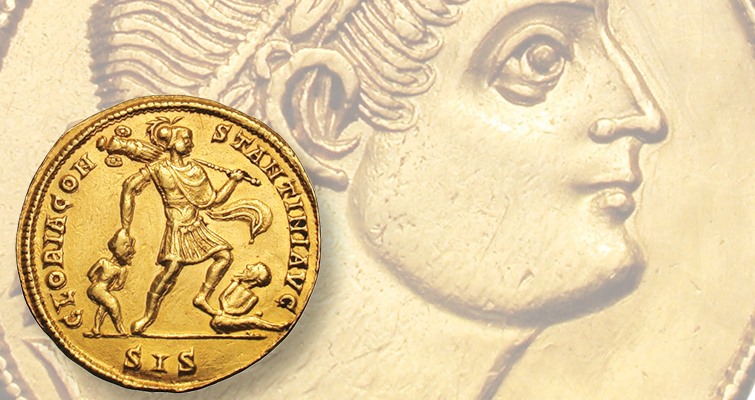 Constantine the Great looks toward heaven on the obverse of this gold 1 1/2 solidus medallion. The reverse shows the emperor dragging a captive and stepping on another. 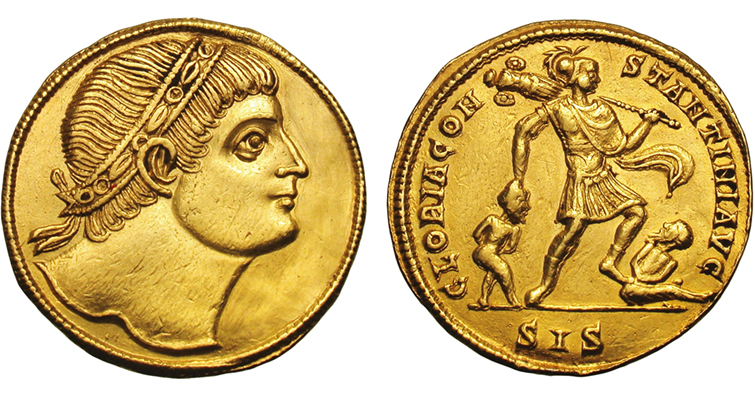 Heritage Auctions sold this Very Fine 1-1/2 solidus gold medallion, showing the saintly Constantine gazing upward on one side and dragging and walking on captives on the other, for $16,675 in 2011.

The world changed Oct. 28, 312, at the Milvian Bridge over the Tiber north of Rome and hasn’t been the same since. On that day, Constantine the Great, fighting beneath Christian banners, defeated Maxentius, winning control of the western half of the Roman Empire.

The day before, Constantine had a vision. In the sky appeared a Christian symbol (either a cross or the Chi-Rho XP monogram, depending on the account) and the Greek words for “In This Sign You Shall Conquer.”

That night in a dream, Christ appeared to Constantine and told him to paint the sign on the shields of his soldiers before they went into battle.

Maxentius drowned in the battle, and his head was paraded through the streets of Rome the next day.

Four months later, Constantine and Licinius, who ruled the East, issued the Edict of Milan, permanently ending persecution of Christians in the Roman Empire. While no copies of the edict exist, a rescript sent by Licinius to the governor of Bithynia says, “Our purpose is to grant both to the Christians and to all others full authority to follow whatever worship each person has desired, whereby whatsoever Divinity dwells in heaven may be benevolent and propitious to us, and to all who are placed under our authority.”

The Catholic Encyclopedia says, “Constantine showed equal favour to both religious. As pontifex maximus (chief priest, a title traditionally held by Rome’s emperors) he watched over the heathen worship and protected its rights.”

Over time, Christianity replaced the old religions as the religion of the state. Constantine was baptized a Christian on his deathbed by Eusebius of Nicomedia in 337. He is especially revered as a saint by Orthodox Christians.

Lifetime coins of Constantine the Great are cheap and plentiful. Most show Constantine on the obverse and a god or military representation on the reverse. A few have the Chi Rho (XP — the first letters of Christ in Greek) symbol in the design. Ancient coin dealers often heap piles of Constantine’s bronze coins on their tables at coin shows, offering them for as little as $5 or $10.

Next: Mom’s a saint, too