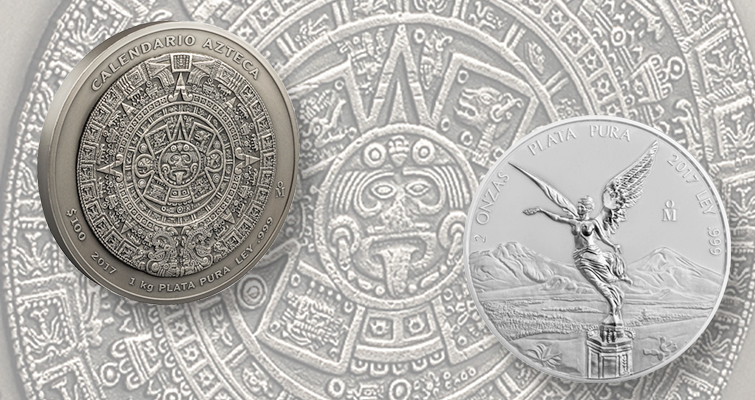 In addition to a plethora of silver kilo Libertads, including an antique silver version of the Aztec Calendar kilo, left, big news on the Libertad front was the unexpected release in December of the very first 2- and 5-ounce Reverse Proof silver coins. An example of the 2-ounce Reverse Proof coin is shown at right.

Release in December 2017 of the very first 2-ounce Reverse Proof silver Libertad coins, along with a 5-ounce version of the same, came as a surprise. These pieces were likely produced for domestic Mexican sales and have a mintage of 2,000 pieces each, one expert expects to be able to confirm. 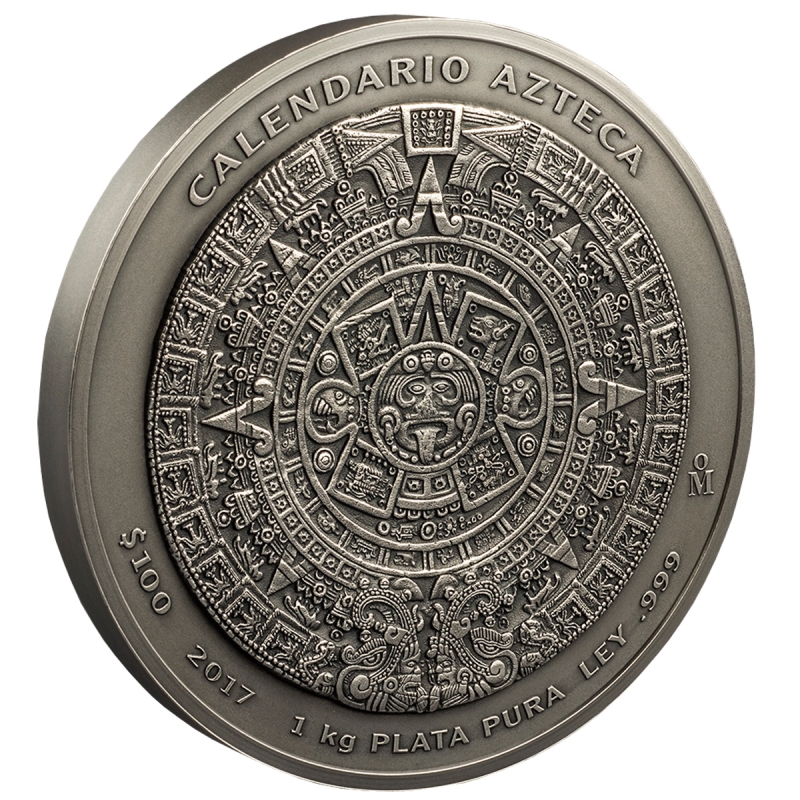 The 2017 antique silver version of the Aztec Calendar kilo has over 32 ounces of silver and costs over $1,000, and was just one of a plethora of silver kilo Libertads released by the Bank of Mexico in 2017.

The Libertad coin series from Mexico was the gift that kept giving for collectors last year. 2017 is not a year they will soon forget, because of all the new coins released and the impact of those releases on their wallets.

As I discussed in my feature in the December issue of Coin World, last year saw the release of a plethora of silver kilo Libertads, including the first high-relief version, the lowest-mintage ever bullion piece, the regular Prooflike coin, and an antique silver version of the Aztec Calendar kilo.

Considering each of these has over 32 ounces of silver and costs over $1,000 (apart from the bullion version if purchased when first released), there must not be many collectors who can keep up with all those coins.

Pat Stovall of Lois and Don Bailey and Son Numismatics, a major distributor of Libertads, said he too found it hard to keep up with all those kilos.

He added that though he does not normally sell the Aztec kilos, he offered the antique silver one to clients this week for $1,099 with check payment. In addition, he noted that he sold out of the high-relief kilos quickly, which were priced starting at $1,157.

The big news on the Libertad front was the unexpected release in December of the very first 2- and 5-ounce Reverse Proof silver coins. Stovall believes these pieces were produced for domestic Mexican sales and that they have a mintage of 2,000 pieces each, but he is still seeking to confirm those details.

A few examples of the 5-ounce coin turned up on eBay recently and have been selling for between $330 and $405 each.

Stovall’s company was able to procure a limited supply of the 2- and 5-ounce coins and offered them to clients for $119 and $237 respectively. Orders for those coins came fast and furious, which is not surprising considering that these are the first coins of their type and that his prices were much lower than those on eBay.

He also noted that he received more orders for the 2-ounce version, which he thinks is because of the more accessible price level, as well as the fact that there are more collectors of the 2-ounce silver coins.

Stovall also said there is a larger market for 1-ounce graded pieces compared to graded examples of the larger silver pieces.