Looking towards 2018 in world coins 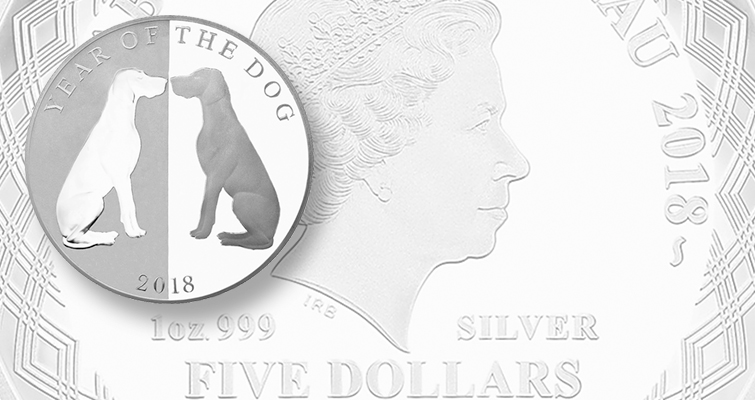 2018, the Year of the Dog in the Chinese Lunar calendar, is already the subject of several new issues, including the Tokelau mirror dog $5 coin, with a huge diameter of 65 millimeters while weighing only one ounce. 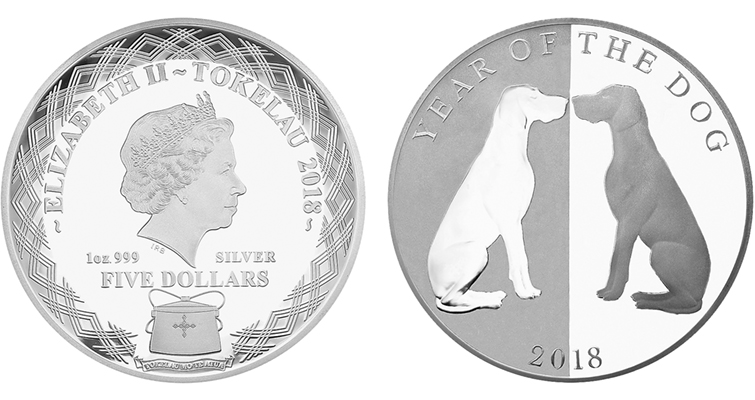 The Tokelau 2018 Year of the Dog $5 coin is 65 millimeters wide but weighs only an ounce and is composed of .999 fine silver. 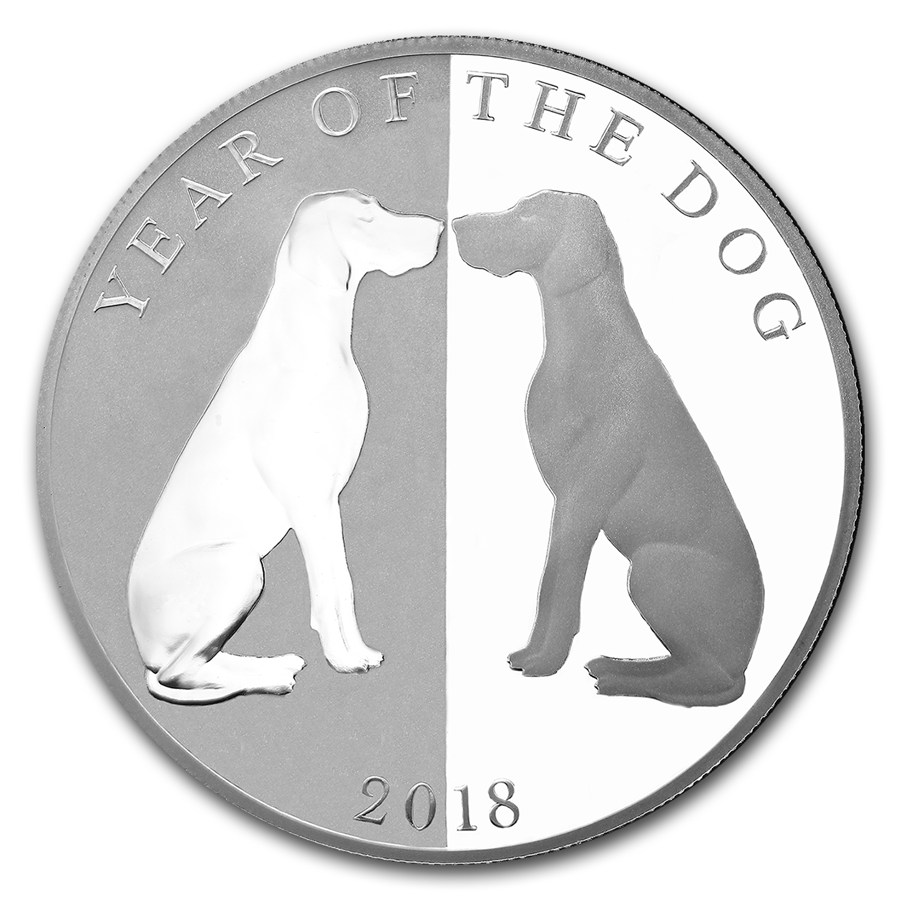 The Tokelau 2018 Year of the Dog $5 coin has a diameter of 65 millimeters while weighing only one ounce. The design's mirror dogs celebrate the next Chinese Lunar calendar year. 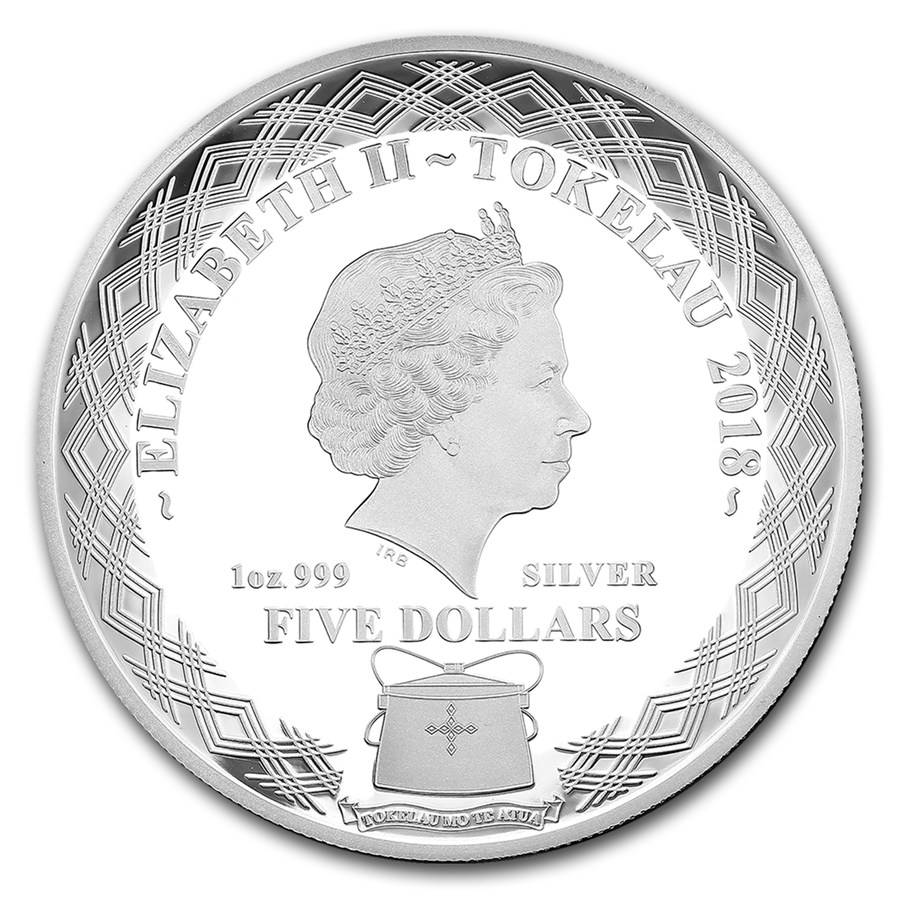 The Tokelau 2018 Year of the Dog $5 coin's obverse design, by consent of Queen Elizabeth II, bears her effigy as designed by Ian Rank Broadley. The design includes the national badge of Tokelau, a South Pacific territory of New Zealand. The badge shows a tuluma (a traditional Tokelauan carved wooden fishing tackle box) with a cross in the center and, below it, a banner with the inscription TOKELAU MO TE ATUA ("Tokelau for God").

2018 will undoubtedly bring many new and interesting bullion and commemorative coins from world and private mints.

I thought collectors might enjoy a preview of some forthcoming issues I heard about recently. This is by no means intended to be comprehensive.

One clever collector who posts on an online coin forum searched Australian legislation on coins and discovered that the Perth Mint has some interesting plans in store for next year.

These include the first-ever 10-ounce silver Wedge Tailed Eagle with a new design by John Mercanti, which will presumably appear on all versions of the coin issued next year. This suggests the mint will likely continue using a new Mercanti design every two years, as it has done so far. It is not clear if the 10-ounce coin will be a bullion or Proof issue, but I hope it is bullion to make it less expensive and so it can compete with the 10-ounce Queen’s Beasts silver bullion pieces.

In addition, Perth will release the second coin in its 1-ounce silver Swan series, which saw the first issue sell out in days and soar in value from $25 to $70 before settling in around $60. A Dragon and Tiger release is planned, likely a follow-up to the popular Dragon and Phoenix coins. There will be a 1.5-ounce silver Crocodile issue, and the Emu coins will be returning in silver as well.

2018 is of course the Year of the Dog in the Chinese Lunar calendar, and new releases for this program are already coming out, including the Tokelau mirror dog release, with its huge diameter of 65 millimeters despite weighing only one ounce. A one-ounce silver reverse Proof dog coin from Tokelau is also in the program.

Perth’s flagship silver and gold Proof Year of the Dog coins will be released Sept. 5 at 8:00 p.m. EST with a wide range of sizes all the way up to a kilo in silver. Perth’s 2018 bullion coin program debuts Sept. 11 with silver and gold 2018 Year of the Dog bullion coins in a wide range of sizes and continues with the Oct. 4 release of the 2018 Kookaburra, the silver Kangaroo on Oct. 23, and the Koala on Jan. 8.

Another development that caught my attention, but which I can only hint at because it is not yet public, is a new series of silver coins showcasing the planets of the solar system from a major mint that I can’t identify.

Finally, Coin Invest Trust, which announced an extensive range of new releases at the recent Denver ANA show, such as pirate skulls, Mount Everest, a cobra, and an impressive meteorite coin, mostly coming out in October, is expected to announce another new group of coins at the beginning of February, during the Berlin World Money Fair, such as the new Tiffany Art coin to be issued in the spring.

Undoubtedly, a dizzying array of other new world releases will arrive for 2018, some of which will be covered here.