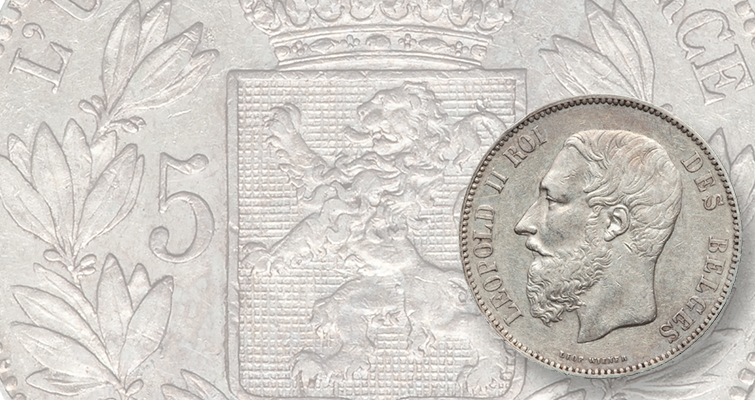 When he wasn’t enslaving the natives of the Congo, Leopold II ruled Belgium. Here he appears on an 1873 5 franc piece. 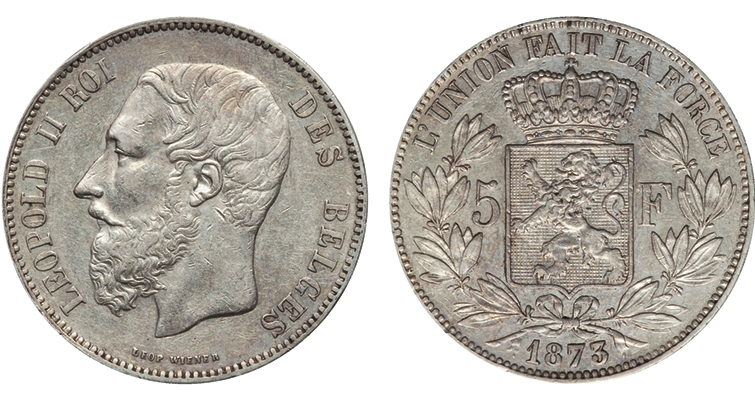 Leopold II ruled Belgium from 1865 to 1909. Here he appears on an 1873 5 franc piece, looking like just another bearded 19th century European monarch. He was benevolent at home, giving workers the right to take Sundays off, but a monster abroad, enslaving the populace and killing and maiming millions in the Congo.

At first glance Leopold II, who ruled Belgium from 1865 to 1909, looks like just another bearded 19th century European monarch.

Benevolent at home, Leopold gave workers the right to form unions and take Sundays off. Child labor was restricted. All men were given the right to vote.

Abroad, though, he was a monster, running the Congo as his private colony, enslaving the populace and killing and maiming millions.

"He turned his 'Congo Free State' into a massive labour camp, made a fortune for himself from the harvest of its wild rubber, and contributed in a large way to the death of perhaps 10 million innocent people,” the BBC reported in a 2004 story on the murderous king’s legacy.

Leopold’s private army, Force Publique, murdered men who failed to harvest enough rubber, and killed their wives and children, too. Leopold’s soldiers cut the hands and feet off children and the penises off men and routinely beat natives to death.

While many of history’s mass murderers were held to account for their sins against humanity, Leopold came out smelling like a well-fertilized rose. The Belgian government bought him out in 1908, extracting the payment, of course, from the Congolese.

In 1914, American poet Vachel Lindsay included these lines in a work called The Congo: A Study of the Negro Race:

Listen to the yell of Leopold's ghost
Burning in Hell for his hand-maimed host,
Hear how the demons chuckle and yell

Cutting his hands off, down in Hell.
Leopold’s portrait appears on the European nation’s late 19th and early 20th century silver and gold coins.
Leopold’s coinage, unfortunately, had a long run. They are common and plentiful.