Gargoyles and Grotesques series debuts with ‘The Decay’ 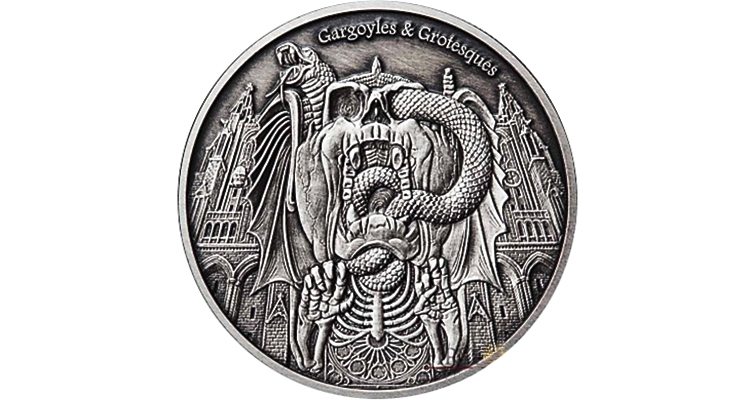 The first in a series called “Gargoyles and Grotesques” issued under the legal authority of the African Republic of Chad depicts a gargoyle from the National Cathedral in Washington, D.C., called “The Decay.” The coins are being issued in silver with two finishes, Antique and Proof; the Antique finish is shown here. 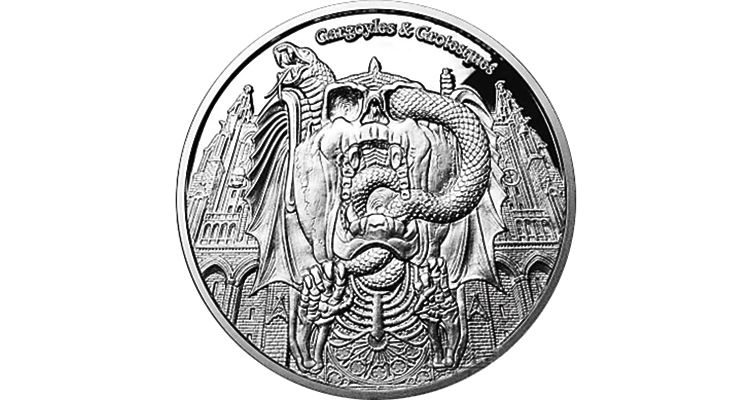 The .999 fine silver 1,000-franc Decay coin issued in the name of Chad is also offered in a Proof finish. 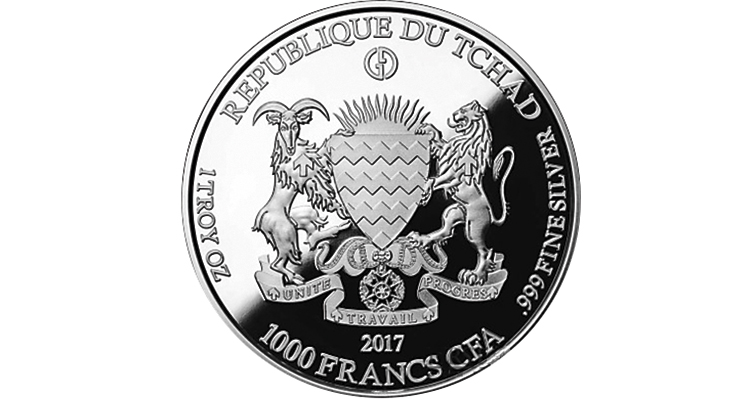 A “Gargoyles and Grotesques” series of 1-ounce .999 fine silver 1,000-franc coins is being issued under the legal authority of the African Republic of Chad. The first coin’s total mintage is 999, including 799 of the Antique finish and 200 of the Proof finish.

Previous
Next
A new coin series called “Gargoyles and Grotesques” issued under the legal authority of the African Republic of Chad is being launched this month. The series will feature coins with designs that are inspired by, rather than reproduce, the gargoyles and grotesques that appear on the world’s most well-known cathedrals and medieval buildings such as Notre Dame Cathedral in Paris.

To keep the focus on the artwork, the reverse, which is where the image of the gargoyle appears, will have only one inscription, the name of the series, while the coat of arms of Chad appears on the obverse side.

Based on the success of recent coin series that depict skulls, dragons, and various mythical creatures, modern coin enthusiasts clearly have an appreciation for coins with unusual and scary designs such as this series carries.

The first coin, which is being issued in silver with two finishes, Antique and Proof, depicts a gargoyle from the National Cathedral in Washington, D.C., called “The Decay.” This gargoyle, which was one of the first added to the building during the 1960’s, is considered to be one of the scariest, making it a great choice for the new coin series, which is likely to be popular.

The cathedral is the seat of the Diocese of Washington and the Presiding Bishop of the Episcopal Church and is visited by thousands of people every year in addition to those who worship and attend mass services there.

The cathedral is the sixth largest in the world and second largest in the U.S. and is widely admired for its stunning architecture, including the 112 gargoyles on the top of the building.

Not everyone knows that gargoyles are not simply artistic details added to make a building look more interesting but, in fact, serve a very practical purpose, which is to divert water during rain storms away from the walls of the cathedral so that the walls do not sustain damage. They are, essentially, very elaborate waterspouts.

While by legend gargoyles, which originated in ancient times and were popularized in medieval times, are said to ward off dark forces, they are also part of the gutter system. And they are especially useful in an area like Washington, D.C., which is known for heavy thunderstorms.

The difference between a gargoyle and a grotesque is that the latter is not part of the water drainage system and is only a decorative depiction of a fanciful creature.

Gargoyles were first used in ancient Egypt, where lion-headed figures served the same drainage purpose. They were also used by the Romans, the Greeks, and Etruscans.

The new coin, made of once ounce of .999 fine silver, is struck in ultra-high relief to bring out all the intricate details of the Decay gargoyle design. Its display box bears the GG logo and the name of the series and holds a serialized certificate of authenticity.

The coin is available from official distributors, including in the U.S., First Coin Company (https://firstcoincompany.com/S/index.php?route=product/search&sort=p.price&order=ASC&filter_tag=GGSERIES) and in Italy, Powercoin (http://www.powercoin.it/en/search?controller=search&orderby=position&orderway=desc&search_query=decay&submit_search).