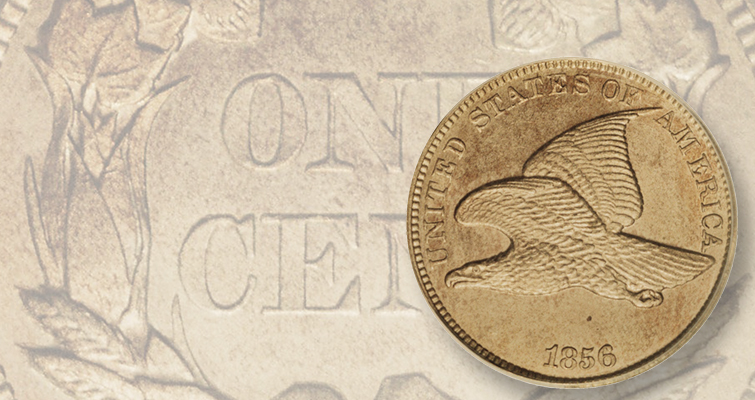 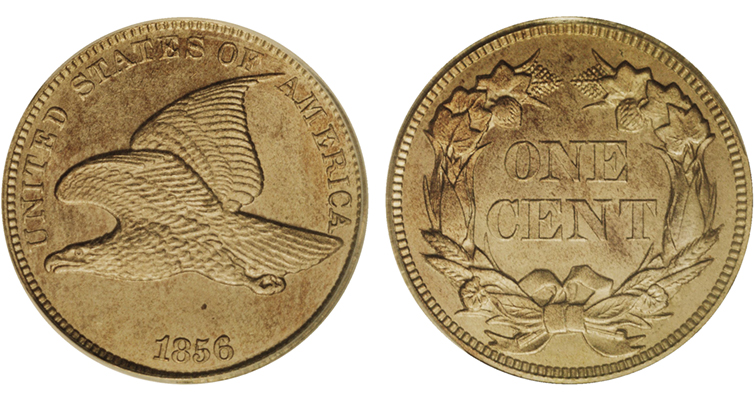 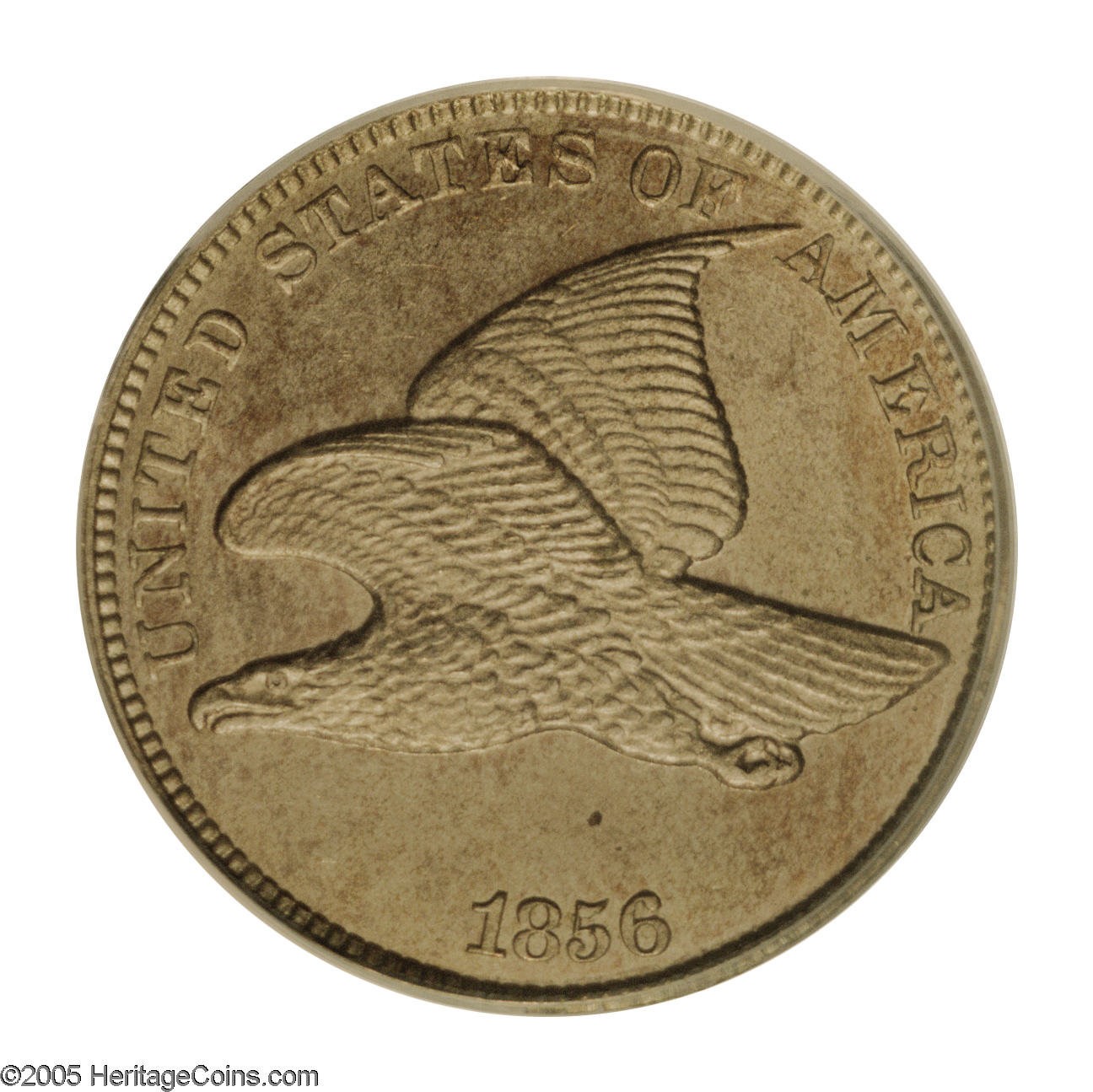 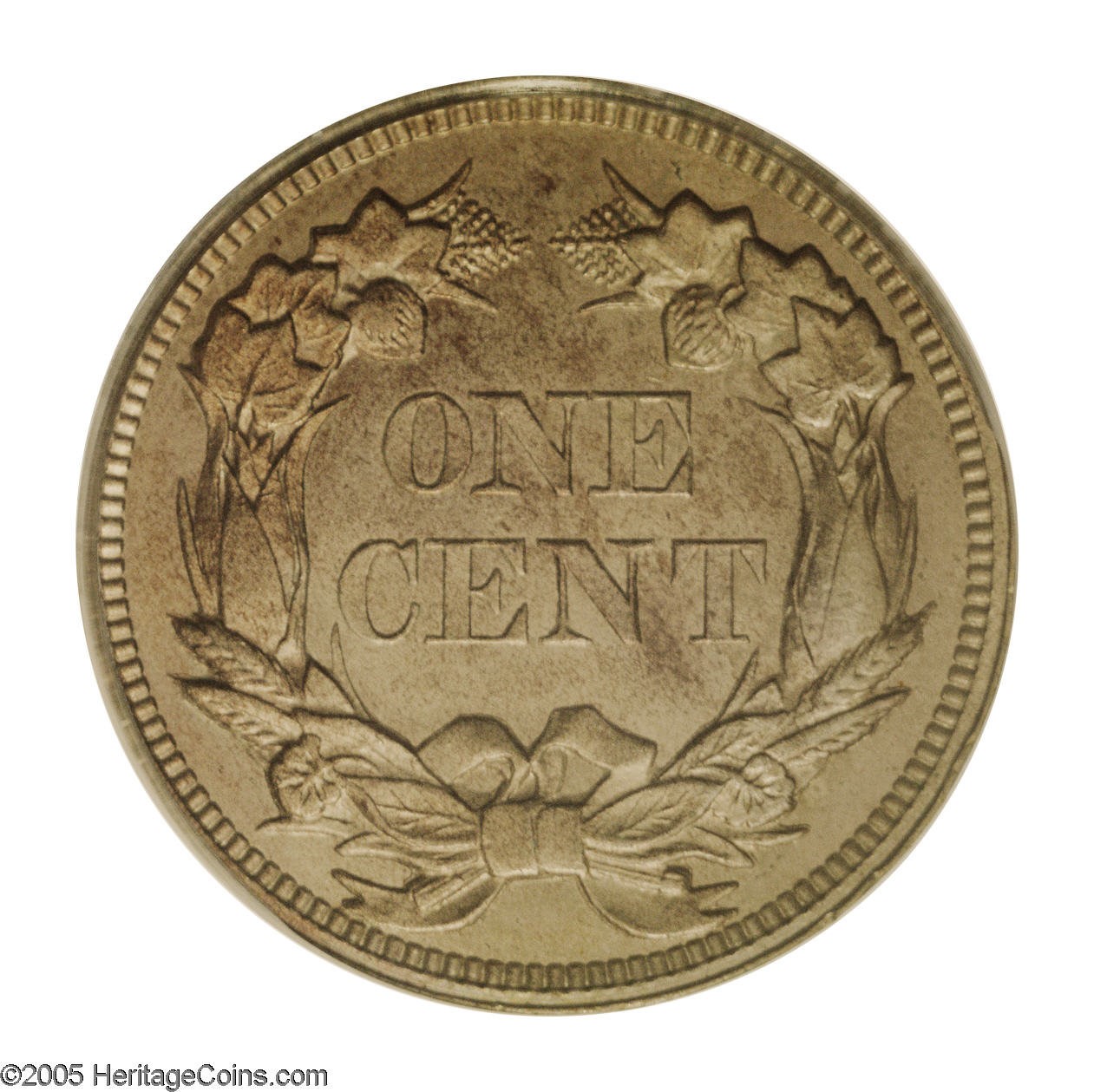 Previous
Next
In the early years of the United States, coins were supposed to contain full value in metal. Cents were reduced in weight in 1795 after the price of copper rose. The precious metal content of silver coins was periodically changed, each time noted with the addition of arrows beside the date. Gold coins were adjusted downward in 1834.

By the 1850s, the Mint was losing money on large cents. Each one contained more than a cent’s worth of copper. The Mint experimented with tiny, holed, 10 percent silver coins in 1850 and 1851 and copper-nickel cents featuring a shrunken Seated Liberty on the obverse in 1854.

By 1856, the Mint had settled on copper-nickel cents with a flying eagle on the obverse and an agricultural wreath on the reverse. The Mint figured that even though the coins did not contain their full value in metal, the white color would be close enough to silver that the public would accept them. The Mint also sweetened the deal by agreeing to accept worn out Spanish colonial reales — silver coins that formed the backbone of the nation’s monetary supply during much of its early years — at full value, if the seller agreed to accept payment in copper-nickel cents.

In his groundbreaking 1959 book, United States Pattern, Experimental and Trial Pieces, Dr. J Hewitt Judd reported, “After the dies for the flying eagle cent were prepared Mr. [James Ross] Snowden wrote to Mr. [Treasury Secretary James] Guthrie on Dec. 4, 1856 as follows: ‘Sir, I have caused a few hundred specimens of the proposed new cent to be struck. It would probably aid us in our efforts to deliver the Country from the present large and unsightly coin if a specimen were furnished to each member of Congress. If you concur in this suggestion I will deliver the department from the trouble of distributing them and send them to the Members of Congress, or transmit them to you for distribution if you prefer that course.’ ”

No one knows how many 1856 Flying Eagle cents were struck, though the number is widely estimated at 1,000 to 2,500 — enough to make the pattern collectable as part of the regular-issue Flying Eagle cent series.

PCGS Price Guide Editor Jaime Hernandez noted for the 1856 cent entry in Coin Facts, “Whatever the exact figure is, one thing is for certain. There has never been enough coins in existence to meet the high demand. One of the clearest indications of the 1856 Flying Eagle cent’s popularity is the prices they command when they do become available. Even in the lowest grades such as Good-4, most examples will command thousands of dollars and even much more when they remain in higher condition.”

The coin, too, was the object of desire of hoarders. Atlantic City collector R.B. Leeds acquired 109 pieces, which were sold with his collection in 1906. Detroit collector and ANA Secretary George W. Rice accumulated 756 specimens in the late 1800s and early 1900s. When his hoard was dispersed in 1911, Pittsburgh collector John Andrew Beck bought many of them.

Beck’s coins were gobbled up by collectors. Researcher/coin dealer Q. David Bowers noted in a 2013 Stack’s Bowers blog entry, “It was thought that the availability of hundreds of pieces would dampen the market, but the opposite proved to be true. The coin hobby was in a period of great strength at the time, all of the 1856 Flying Eagle cents found ready buyers, and the price increased!”

When the Flying Eagle cent was officially released the following year, it proved popular with the public. Cents were needed in commerce, but no one liked handling the old heavy large cent. The white color, too, eased acceptance.

Next: The Lincoln Cent and anti-Semitism