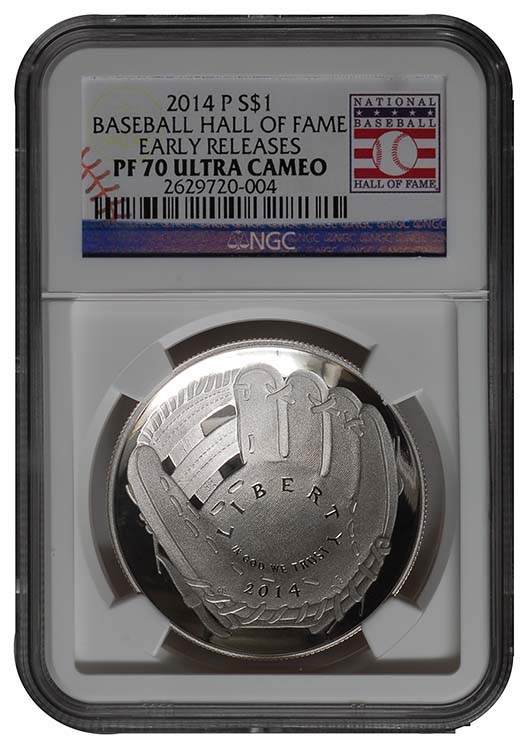 The 2014 Baseball Hall of Fame commemorative coins, which included this silver dollar, were popular in part due to their domed shape.

The success of last year’s Baseball Hall of Fame commemorative coins, which had a convex/concave, or domed, shape, and were a big hit with collectors, has prompted some people to wonder if U.S. collectors want more coins that are non-traditional in their shape or appearance.

For example, when the Pro Football Hall of Fame coin (which is still only a legislative proposal pending in the U.S. Congress) was first proposed, there was some discussion about whether it should be shaped like a football.  But it would be very difficult to create a coin of such a shape, and the fact is that the U.S. Mint has little experience producing coins of unusual shapes.  That is why it had to consult with the French and Australian Mints to produce the baseball coin, which was a very challenging project for the Mint, as was detailed in the pages of Coin World last year.

Besides, from what I hear from collectors it would probably be accurate to say most of them are not big fans of many of the unusual types of coins other world mints are issuing.  There does not appear to be much desire for colored coins, for example, and the same applies to coins with elements like crystals.

However, if not overdone and if limited to coins whose subject matter lends itself to the domed shape, I do think U.S. buyers would go for that shape again.  In fact, the proposed 2019 50th anniversary of the Apollo 11 moon landing commemorative coin series, which the Citizens Coinage Advisory Commission endorsed at its recent meeting in Portland, may be minted in that shape.  That makes sense since it would resemble the moon.

Another innovation that American buyers might go for, if tastefully done, would be selective gilding, or gold-plating.  The upcoming 30th anniversary of the American Silver Eagle program next year might provide the occasion for a gilded American Silver Eagle.  But I highly doubt buyers would want one every year.

All things considered, collectors of U.S. coins are probably more inclined towards traditional coins than collectors of world coins, but there is still scope for plenty of innovation within those parameters, especially in terms of bolder designs.