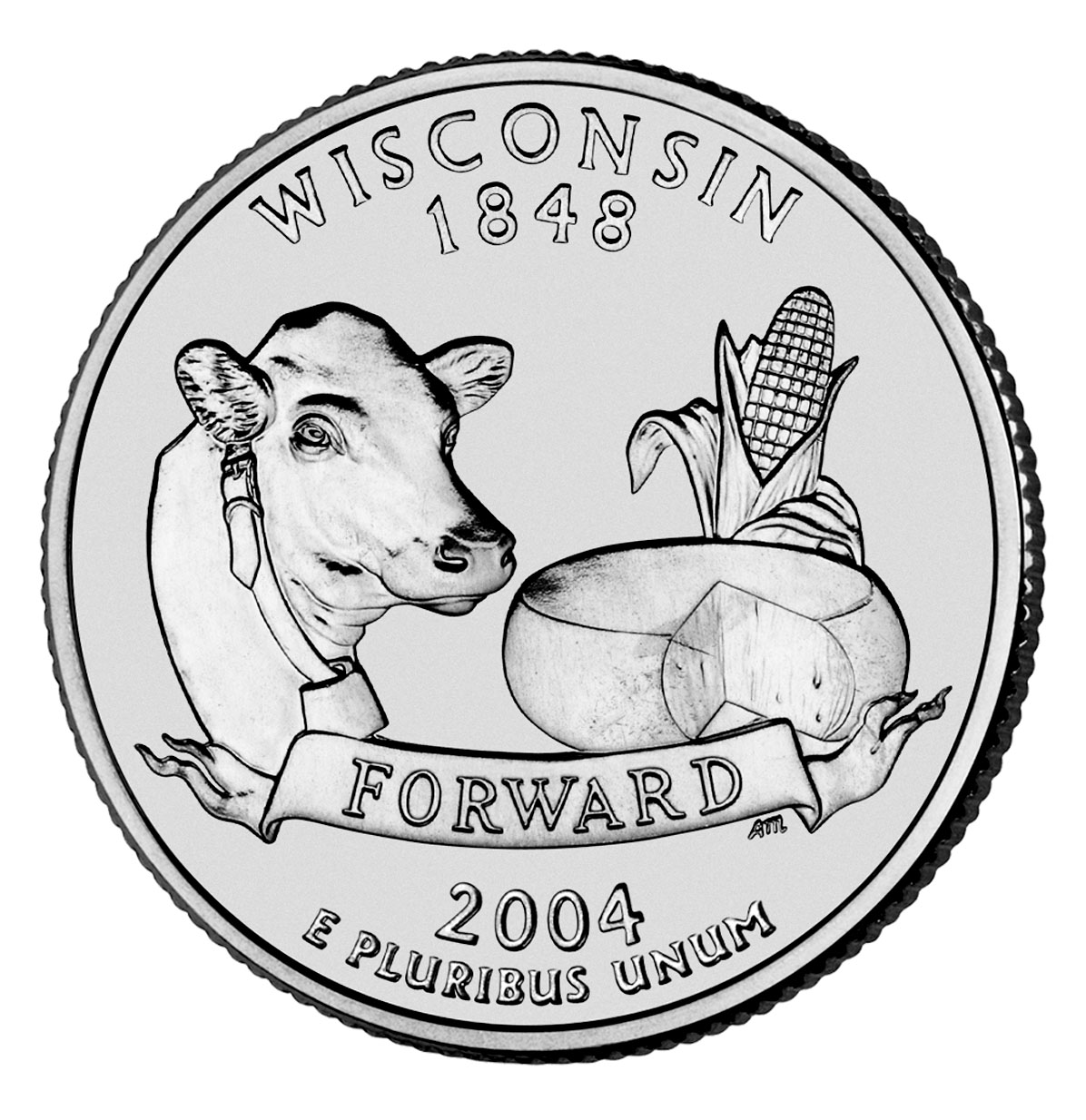 If you like fresh corn, a bit of cheese and a friendly looking cow, along with what could be taken as a positive admonishment, the standard 2004-D Wisconsin quarter dollar in the U.S. Mint's 50 State Quarters Program is for you. But wait, there's more...

Check out that tiny, fingernail-slice-sized sliver that has come to be known variously as the Extra Leaf, High variant, or simply the high leaf variety of the 2004-D Wisconsin State quarter. It's the rarer of two flaws, mostly found in the Tucson area in late 2004, soon after the coin was launched.

Here is the tiny, fingernail-slice-sized sliver on the high leaf error, close-up.

Some note that 2004-D Wisconsin quarter dollar's extra leaves, here shown on the Extra Leaf, Low error, are not so much leaves as parts of a circle. They figure something circular dropped on the dies while they were in an annealed, softened state, leaving the appearance of extra leaves. Others imagine criminal activity, while the Mint claims accidental use of a flawed die.

Collectors were electrified in late 2004 when word came from Tucson, Arizona, of all places, that extra leaves had sprouted on the ear of corn on the reverse of some Denver Mint Wisconsin 50 State quarter dollars.

The corn, which is to the right of the cow and above the round of cheese (this represents Wisconsin, after all) is nestled in a few leaves or husks. What appeared to be an extra leaf sprouted on two varieties. One shows the “leaf” in a high position and another shows it low. The high-leaf variety was rarer than the low-leaf one, and both were scarce enough to warrant a stampede of change searching across the country.

Most, though, appear to have been released in the Tucson area.

USA Today reported Feb. 10, 2005, “News that some of the Wisconsin state quarters are flawed and worth big bucks is generating renewed interest in the 50-state quarters a little more than halfway through the program's 10-year lifespan.

“‘The phones have been ringing off the hook,’ says Jack Chapman, owner of usstatequarters.com in Springbrook, Wis. Sales have doubled in the past few days on both the Web and on the phone.”

The source of the error was immediately the cause of collector speculation.

Romantics mulled that it was the result of midnight mischief at the Mint, a practice not unheard of.

Others noted that the leaves were not so much leaves as parts of a circle and figured something circular had dropped on the dies while they were in an annealed, softened state, leaving the appearance of extra leaves.

The Mint investigated the coins and determined that 50,000 flawed coins were produced by accident in November 2004. A press operator working the Friday night shift noticed the error coins but left for a break before changing out the die. When he returned to work he noticed his press was running and assumed someone else had fixed the problem.

Tucson dealer Rick Snow, operating as Eagle Eye Rare Coins, made a market in the errors early on, offering $50 apiece for the coins before their rarity became known. The company’s website notes, “These dramatic errors were discovered in late 2004 by Bob Ford in Tucson, Arizona. Within a year they became the subject of extreme speculation and debate over their cause.

“Now, over ten years later, they are known,” Snow’s website claims, “to have been deliberately created at the Denver Mint by someone who sabotaged two different dies with a small tool.

“Their overall rarity has now been determined to be similar to that of classic die errors like the 1955 Doubled die cent and 1937-D 3-leg Buffalo nickel,” Snow’s website continues.

Three-sets of regular, high leaf and low leaf coins traded briefly at the $7,000 level during a bubble in early 2006, Snow said.

While interest in the 50 State Quarters program and the Wisconsin errors has flagged since that program ended in 2008, the Wisconsin quarters still command a hefty premium. Coin World’s Coin Values pegs the MS-67 value of the Extra Leaf, High variety at $2,000 and the Extra Leaf, Low one at $1,400.