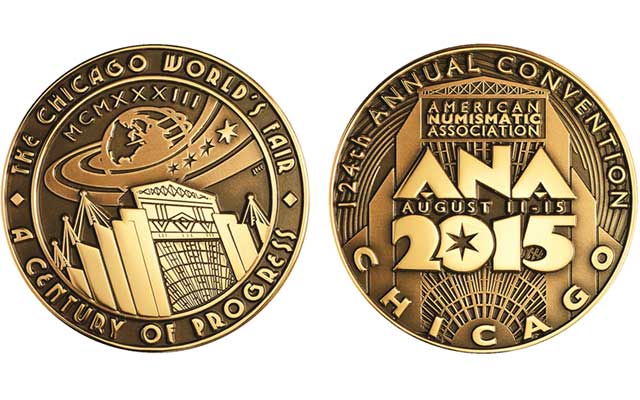 Medal being issued in conjunction with the ANA World's Fair of Money promotes the largest coin convention of the year, set for Aug. 11 to 15 in Rosemont, Ill., near Chicago.

?The summer hobby doldrums should end with the American Numismatic Association World’s Fair of Money in Rosemont, Ill., Aug. 11 to 15.


The late spring and early summer are often quiet times in the collecting community: many take vacations starting after the end of school, and in families where the collecting gene wasn’t passed along to the children, collecting pursuits are left at home. Hobby business can drop off for some firms and the auctions and shows conducted during this period are usually smaller affairs. Collectors, however, whip out their loupes and update their want lists as the ANA’s annual summer show approaches.


Rosemont will again become the center of the numismatic universe for a full week, with abundant opportunities for collectors and dealers alike. ANA officials have anchored its summer convention at this northern suburb of Chicago in recent years, viewing the centrally located site as a good one, with easy airport access, sizeable convention center space, and ample hotel accommodations.


If you’ve never attended an ANA show, you really should consider treating yourself. Here’s what you can expect this year:


There’s the hobby business that will be contracted at the convention, of course, on what is traditionally the largest numismatic bourse of the year and at the many auctions to be held in conjunction with the show. Chances are excellent that you will find something for your collection.


Then there are the many educational opportunities. The ANA and other clubs conduct numerous educational forums, most of which are free and open to the public. Topics this year range from “Aksumite Coinage” to “Lincoln in Numismatics.”


Many mints private and government will be on hand to showcase their numismatic collector products and even sell their latest creations. However, don’t expect the U.S. Mint to have a major show release like the 2014-W Kennedy gold half dollar issued to great excitement and disruption in 2014.
Finally, there’s the social aspect of a large coin show, where friends can gather to share their hobby experiences and renew acquaintances.


Much of the Coin World staff will be present at the show. I will be there from Thursday through Saturday; please stop by the Coin World booth and say hello.