A quarter century too late 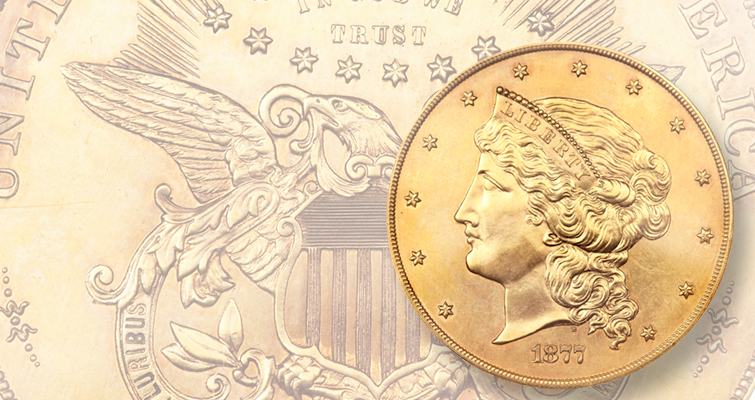 After its inception in 1854, out of the blue, Charles Barber cut dies in 1877 for a pair of half-union patterns, from which single gold pattern coins and a handful of copper pieces were struck, including this gilt-copper example.

Previous
Next
The $50 gold piece is an on-again, off-again denomination that was struck for various purposes over more than 150 years. It can all be traced to the California Gold Rush.

Gold dust and nuggets were everywhere in California during the early years of the Gold Rush, but coins were scarce. Into the void stepped numerous private mints and the United States Assay Office. The provisional government Mint struck $10 eagles and $20 double eagles but is most known for its massive $50 gold pieces, each one weighing about 2 ½ ounces.

The coins circulated widely and were especially beloved by bankers because in an area where paper money was not welcome, the hockey pucks made it easier to keep accounts.

When the San Francisco Mint opened in 1854, local bankers petitioned the government to keep the denomination. Treasury Secretary James Guthrie recommended that Congress authorize the coining of $100 gold coins, to be called “unions”; $50 coins to be called “half unions” and $25 coins to be called “quarter unions.”

The issue passed the Senate on June 16, 1854, but never surfaced in the House.

The half union lay dormant for more than 25 years until 1877 when, out of the blue, Charles Barber cut dies for a pair of half-union patterns. A single gold pattern and a handful of copper pieces were struck from each die.

Researcher Don Taxay theorized that Mint Director H.R. Linderman, a coin collector, ordered the coins produced for his own use.

No unions, which would have weighed about 5 ounces, or quarter unions were produced and nothing came of the pattern $50 gold pieces.

In 1915, the denomination enjoyed a brief respite when a few hundred commemorative $50 gold pieces were struck as part of the Panama-Pacific International Exposition celebration. Since 1986, United States 1-ounce gold bullion pieces have been nominally denominated as $50 pieces, but there was never a thought that these round pieces would actually circulate as coins, especially because the denomination minted into its design is about 1/25 of the piece’s value as metal.

Next: Eleven cents and a buck and quarter