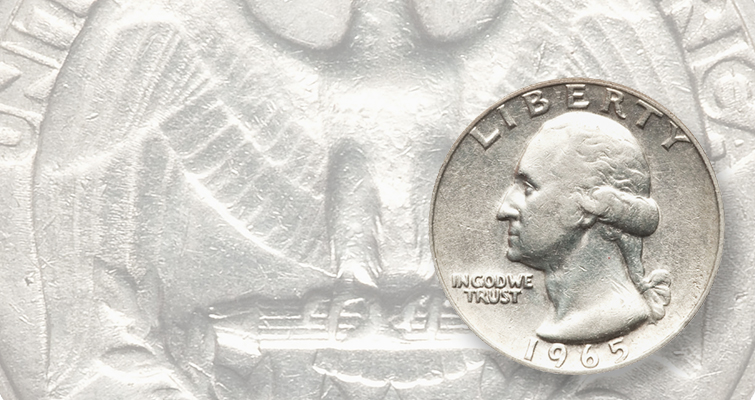 The year 1965 was one of transition for U.S. coinage. The Mint was striking both 1964 Washington quarter dollars on 90 percent silver planchets and 1965 Washington quarters on copper-nickel clad planchets. This coin captures the transition perfectly even though it is an error — it is a 1965 quarter dollar struck on a silver planchet intended for a 1964-dated coin. This piece sold for $2,760 in an April 2011 auction by Heritage. 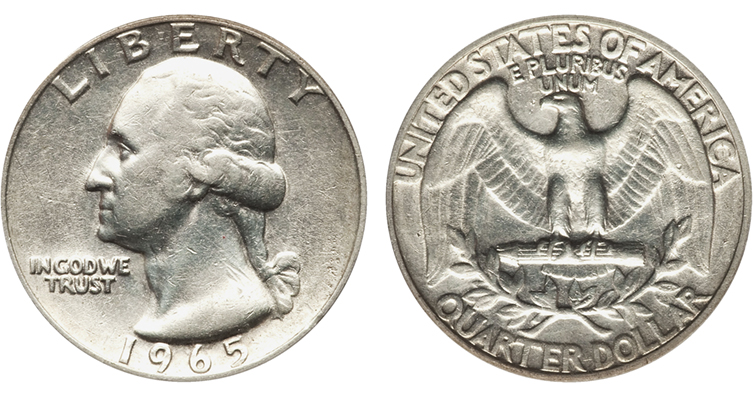 From 1965 to 1967, coins were struck past the end of the calendar date they bore. This 1965 Washington quarter dollar transitional error struck on a 90 percent silver planchet intended for a 1964-dated coin could have been struck in 1966.

?On Nov. 1, 1965, Washington quarter dollars unlike anything that been released before — the first U.S. copper-nickel clad coinage — were poured into circulation by the Treasury Department through Federal Reserve System channels.

Until that first day of November 50 years ago, three kinds of U.S. circulating coinage were legally classified: minor coinage, those pieces made of a nonprecious metal (in 1965, just the cent and 5-cent coin remained); silver coinage (the dime, quarter dollar, and half dollar in 1965); and gold coinage (none of which had been struck or circulated since early 1933).

The Coinage Act of 1965 upended nearly 175 years of federal coinage laws, converting the dime and quarter dollar into what was essentially minor coinage, and lowering the silver content of the half dollar from 90 percent to 40 percent.

This was a change of historic proportions and collectors were accepting though not thrilled.

As Coin World editor Margo Russell wrote in her Editorial in the Nov. 17 issue, collectors had been awaiting the new coins with mixed feelings:

“Coin collectors knew why and how the coins were being manufactured — they were just waiting for a look at the finished product,” she wrote.

“The collectors’ verdict?” she asked, and answered, “Most agree the new coins will serve their purpose as coin of the realm, their sole function from a Treasury standpoint, but it is the collecting consensus that few people will collect clad coins in quantity or for their aesthetic qualities.”

Margo wrote that this collector disinterest would serve Treasury goals. Concurrent with the rise in the price of silver that drove the conversion to a copper-nickel clad coinage was a nationwide shortage of coinage. The vending industry demanded higher and higher numbers of coins every year and the Bureau of the Mint had taken several steps in the early 1960s to ramp up production: reopening the San Francisco Mint for coinage production,which had last occurred in 1955; increasing the number of production shifts;and adding additional coining presses to its facilities.

Treasury officials had blamed collectors and “speculators”for much of the coinage shortages. The collector sentiment was “good news for the Treasury,” Margo noted, adding “its task will be made easier by the initial lack of collector interest in the new pieces.”

The hobby was doing what it could to repair relations with those who governed the Mint, even to the point of refusing to profit by the change, at least immediately. Margo noted, “Major segments of the numismatic press have agreed not to accept advertisements offering the new clad coins inbulk quantities until there are sufficient quantities in circulation.”

Attempts at repairing the relationship had begun several months before release of the new coins, Margo revealed, crediting both major hobby organizations and a receptive Treasury Department for working toward the thaw. She especially hoped that improving relations would prompt government officials to offer collectors something more; the Mint had stopped making Proof sets and Uncirculated Mint sets in 1965 to focus on circulating coinage, and had gotten authority to remove all Mint marks as well (collectors would have to be satisfied with a single 1965 quarter instead of three coins, one each from the Philadelphia, Denver and San Francisco facilities). The Mint would offer 1965, 1966,and 1967 Special Mint sets, but production of the traditional annual sets and restoration of Mint marks would have to wait until 1968, so Margo was right about the Mint’s resumption of collector-friendly outreach, if a bit optimistic.

As for the Nov. 10 news article, there is a statement collectors today will find laughable.

Treasury officials expected the silver coins to circulate alongside the copper-nickel clad ones “for their normal 25-year life span.”

We know how that went, don't we?