&quot;Freedom&quot; The Fall of the Berlin Wall 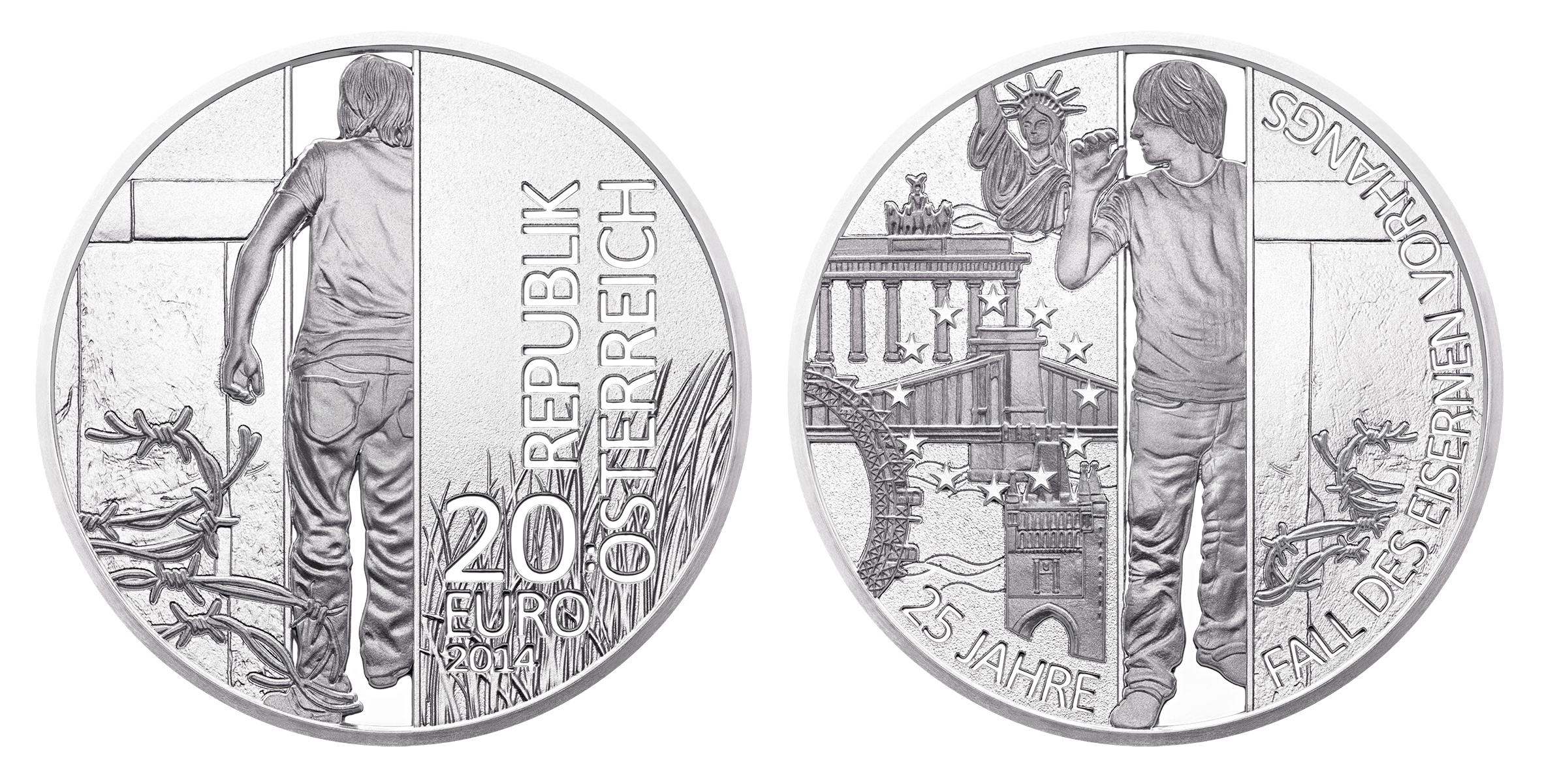 25TH ANNIVERSARY OF THE FALL OF THE IRON CURTAIN Picturing the decisive events associated with the collapse of the Berlin Wall, this ingenious and resonant silver coin celebrates the 25th anniversary of one of the key events in recent world history.

I am so moved by this coin and the memory of this world event.  Most of us remember where we were when the “Wall” began to crumble. It was the end of communism in Europe and the reunification of so many families divided far too long by something over which they had no control.  The story comes alive when looking at the silver coin that commemorates this time in our history.

The obverse shows a young man cutting through the Wall leaving behind the barbed wire of the communist world on the left side and going towards freedom and greener grass on the right side.

The reverse of the coin shows the young man coming through the wall and into freedom. The barbed wire is now behind him and he looks forward to see global symbols of freedom: the Statue of Liberty, the Brandenburg Gate  (which was on the very front of this wall),the Elisabeth bridge connecting eastern Hungary to the West, the giant Ferris wheel of Vienna and the Charles Bridge in Prague, all symbols that bridge to the free world. Superimposed on this are the stars of a free and united Europe.

The wall began to crumble on June 27,1989.  The foreign ministers of Austria and Hungary met at the barbed wire fence along these borders, separating the West from the East.  The time had come for the end of the divide in post-war Europe.  A picture flashed around the world that showed these men wearing suits and using a heavy wire cutter together cutting through the barbed wire, thus marking the  beginning of the end of communism in Europe and the crumbling of the Iron Curtain.

Personally when I heard the news, I didn’t  believe it for some time.  Not until the  weeks leading up to November 9, 1989 as the “Wall” continued to crumble all the way north to Berlin did I begin to think this might really happen. Within just 5 months the end of the physically divided East and West had come – a dream come true for so many people.

I remember the “Wall” very well.  Not that I lived in Berlin, but anytime I was in Berlin I saw how it effected daily life. Perhaps if you lived in Berlin, you would get used to it.  But in my case I always saw and felt its  presence. The experience of crossing into the East was memorable; it took such   a long time and it was such a serious process. Once on the eastern side you could see the vast areas of barren land all along the wall, the deserted houses that were in its shadow, the guard towers,the dog runs, and who knows what else I couldn’t see.  All of this was very poignant.

On one occasion I entered the then just liberated East Germany at night.  We crossed by car through a zone that would have been flooded with search -lights.  But by then, only a matter of weeks later,the whole area was virtually dark with empty guard towers silhouetted against the dark sky.  It was truly an eerie sight.

The notorious Wall was 155 km long, of which 43 were in Berlin.  There were 302 watchtowers,along with 105.5 km of anti-vehicle ditches, as well as 259 dog runs.  It was a formidable barrier through which more than 100,000 easterners tried to escape. It is thought that more than 600 were killed in these attempts either shot or killed by the guards, or by their own escape efforts (such as drowning),or committed suicide when they were caught.

Today only one kilometer of the Wall still stands as a memorial to these years and all that happened.  Many people, who were called Mauerspechte(wall woodpeckers), chipped away at the wall and took home a piece as a memento.  In the city of Berlin there is a continuous line built into the streets, sidewalks and parks, which delineates where the wall used to stand.

So much has changed in the intervening 25 years.  The former cobblestone highways   of the east have been updated to the western standard of modern times. The city of Berlin is alive and modern.  Elegant modern architecture is everywhere, including the massive US Embassy right beside the Brandenburg Gate. The Brandenburg Gate has been restored.  I am moved emotionally whenever I’ve been able to wander back and forth through the Gate, admiring its classic architecture and reflecting about what it means to be able to freely do this.