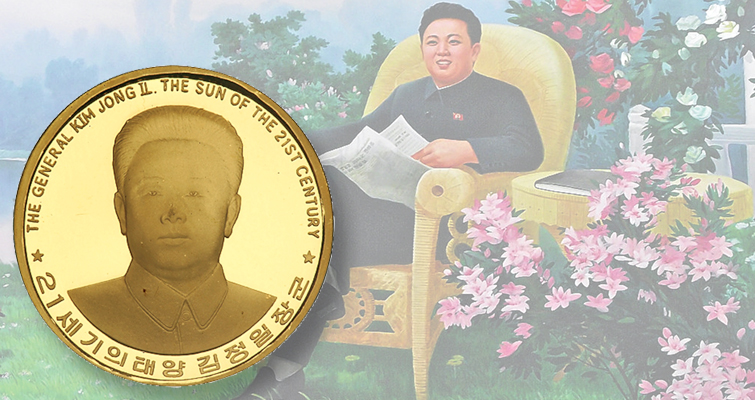 "Dear Leader" Kim Jong-il, North Korea’s supreme leader from 1994 to his death in 2011, was an Elvis Presley fan. The former leader is seen on coins and in other images wearing his idol's hairstyle. 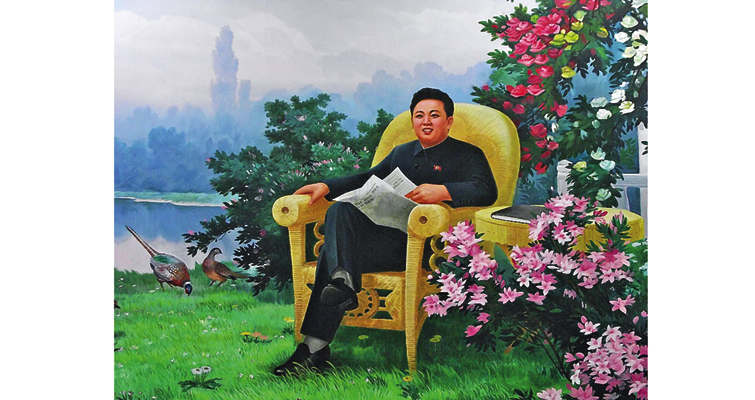 A North Korean poster shows Kim Jong-il in a serene setting, apparently enjoying his morning paper and companionable pheasants, as an estimated 1 million to 3 million North Koreans were starving to death in a famine during the early years of his reign. 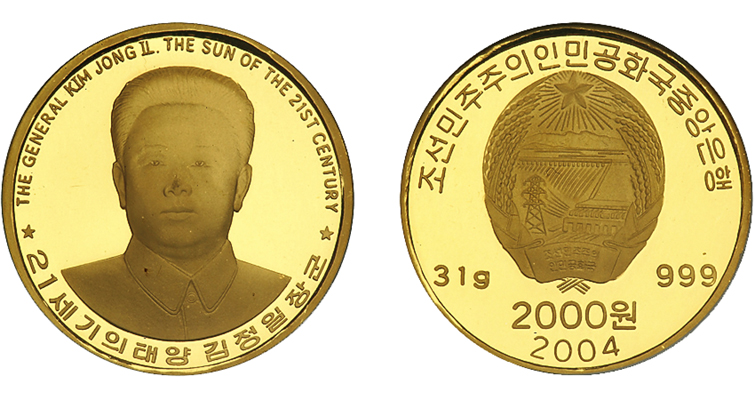 This 2004 North Korean 2000-won coin, which Numismatic Guaranty Corporation graded Proof 69 Ultra Cameo, realized $690 in the Ira and Larry Goldberg Auctioneers Pre-Long Beach Coin and Currency Auction held Sept. 10 through 13, 2006. The firm had estimated its value at $550 to $650.

Previous
Next
Kim Jong-il was North Korea’s supreme leader from 1994 to his death in 2011. Dear Leader (Really, that’s what he was called) succeeded his father, Great Leader Kim Il-sung, and was father to Brilliant Comrade Kim Jong-un, the hermit kingdom’s current ruler.
Language doesn’t have words bad enough to describe Kim Jong-Il, his dad and his chubby son. An estimated 1 million to 3 million North Koreans starved to death in a needless famine during the early years of Kim Jong-il’s reign.
God, though, apparently thought he wasn’t so bad.  According to North Korean media, the heavens cried when Kim Jong-il met his maker. The BBC relayed the report Dec. 22, 2011. “Ice cracked on a famous lake ‘so loud, it seemed to shake the Heavens and the Earth’, and a mysterious glow was seen on a revered mountain top, KCNA said.”
The report continued, “Following the storm's sudden end at dawn on Tuesday, a message carved in rock — ‘Mount Paektu, holy mountain of revolution. Kim Jong-il’ — glowed brightly, it said. It remained there until sunset.”
Dear Leader appears on several coins from the 1990s and 2000s, mostly showing half and three quarter portraits of Mr. Misery greeting diplomats. The most entertaining is a 1992 50-won silver piece celebrating Kim Jong-il’s 50th birthday. The coin has the nation’s coat of arms on the obverse and a facing bust of Dear Leader on the reverse.
If you squint a bit while looking at the coin, the high-haired murderer looks just like his idol, Elvis Presley. Dear Leader, it turns out, was a huge Elvis fan, adopting the King’s jumpsuit, sunglasses and even his bouffant hairstyle.
The coin can be difficult to locate. In July, a deep cameo Proof sold for $305 on eBay.
Next: Leopold’s private hell