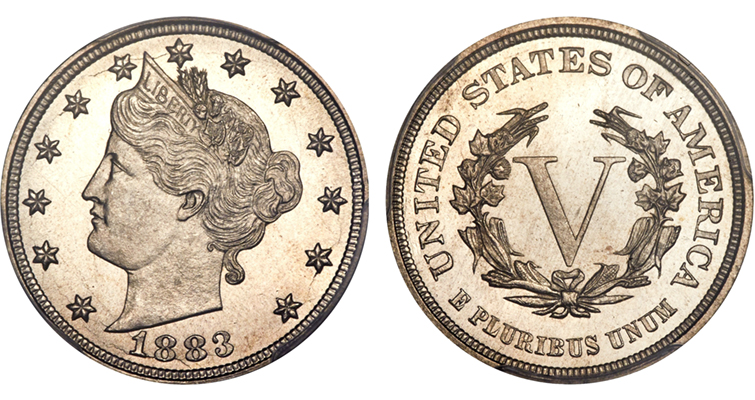 1883 No CENTS 5-cent coin. Swindlers saw the size similarity to the $5 gold coin, plated the 5-cent pieces and passed them off for a profit. The design was quickly modified.

The seeds for the debacle were planted in 1881 by Philadelphia Mint Supt. A. Loudon Snowden. Mint Engraver Charles E. Barber nurtured it to fruition over the next two years.

Snowden wanted the Mint to the shrink the cent, slightly enlarge the nickel 3-cent and 5-cent pieces and strike all three in an alloy of 75 percent copper, 25 percent nickel.

Snowden reportedly wrote that year, “I have recommended and shall earnestly advocate the adoption by Congress of a comprehensive plan or system which will bring order out of chaos and establish what should long since have been fixed, to wit, a simple yet comprehensive plan under which all the coinage should range itself.

First. I would have uniformity of alloy

Second. Due proportions of weight in each piece

Fourth. Due proportions in the sizes of thecoins.”

The obverse, he wrote, would include “a classical head of Liberty, surrounded by the words UNITED STATES OF AMERICA and the date below. On the reverse, I would have a wreath composed of wheat, corn and cotton, products of the country, surrounding the Roman V, III, I on the 5, 3 and 1-cent pieces respectively.”

The copper nickel cent and revised 3-cent piece died aborning, but the 5-cent piece made it to production.

In his 1883 Director of the Mint Report, Horatio C. Burchard reported, “It seeming probable that the coinage of a considerable number of these coins (5-cent pieces) would be required, the superintendent of the Philadelphia Mint believed it to be a favorable opportunity for issuing a coin more artistic in its appearance and execution, having the same weight but an increased diameter, and more nearly complying, as to devices and legends, with the requirements of the law.

“Specimen coins were accordingly prepared by him and submitted to the Director of the Mint and the Secretary of the Treasury, and on the 8th of January, 1883, he was authorized to issue coins of the weight, size, and having the devices proposed.“

However, a fatal flaw was in the details. The Shield 5-cent piece recorded the denomination as 5 CENTS. The new coin, in accord with Snowden’s directive, had a big V on the reverse, but the word CENTS was nowhere to be found.

The new coin, too, was close to the size of the $5 gold piece, which differed imperceptibly at 21.6mm.

It didn’t take sharpies long to figure out that they could gold-plate the 5-cent piece and pass it off as a $5 gold piece. The gold-plated coin, called a racketeer’s nickel by collectors, has taken on a life of its own and now occupies a unique place in the folklore of numismatics.

For decades, collectors repeated the story of Josh Tatum, a deaf mute who supposedly passed off the gold-plated nickels as $5 gold pieces but avoided prosecution because he never said the coins were half eagles. The story, since debunked, goes that Tatum would place a gold-plated coin on the counter in payment for an item costing a penny or two and pocket whatever change was offered, even if it was $4.99.

Researchers have concluded that the story was made up of whole cloth sometime in the 1960s and repeated as gospel ever since.

While Tatum turned out to be fraud, the underlying fact that con men gold plated the coins was recently confirmed by archaeologists digging in Deadwood, S.D.’s, Chinatown.

Among a cache of some 200 coins excavated in 2009 was a gold-plated Liberty Head 5-cent piece.

In mid-1883, after some 5.5 million NO CENTS coins had been minted, Barber revised the reverse, placing the word CENTS below the V. Another 16 million with CENTS coins were produced that year.

Next: The nickel that doesn’t officially exist