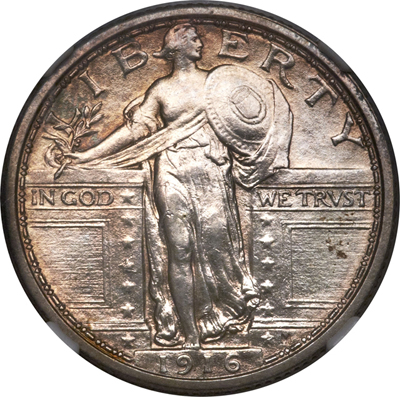 The Bare Breast Standing Liberty quarter features one of five U.S. numismatic nudes being highlighted on the Five Facts blog.

Bare Breast Standing Liberty quarter. Beloved by 15-year-old boys everywhere, the Standing Liberty quarter dollar issued in 1916 and early 1917 shows Liberty holding a shield and baring a breast. Researcher Walter Breen claimed in his Complete Encyclopedia of U.S. and Colonial Coins that the design was modified in 1917 to cover the offending breast because of pressure from Anthony Comstock’s New York Society for the Suppression of Vice, a morality police that disbanded in 1950. Coins issued from mid-1917 on show chainmail over the offending breast.

U.S. Diplomatic medal. This U.S. Mint medal, designed by Thomas Jefferson shows a bare-breasted Indian maiden representing Peace welcoming a nude male Mercury, representing Commerce, to America. Jefferson commissioned famed French engraver Augustin Dupre to produce the medal “as a medal to be given to diplomatic characters on their taking leave of us.” The State Department discontinued use of the medal in 1791 but bronze copies have periodically been available from the U.S. Mint over the centuries.  It is currently listed as “sold out” on the Mint’s website.

$5 Educational bill. This 1896 silver certificate, part of the 1890s Educational Series, shows an allegorical scene titled  “Electricity Presenting Light to the World. “ Electricity is holding a gleaming light bulb above her head and baring a breast.  Breen claimed that Comstock objected to these items, too, and forced their recall. Some sources, too, claim Boston bankers refused to accept the bill, giving rise to the expression, “Banned in Boston.” Both claims are likely hokum but make for good stories

1984 Olympic commemorative silver dollar. The obverse of the coin shows naked male and female torso statues above the entrance to the Los Angeles Olympic stadium.  How naked, though, is up in the air.  Mint Director Donna Pope said the artists submitted very explicit plaster models.  She called Bill Smith, the Philadelphia Mint’s head of production, and told him “in rather specific terms ‘to lower the relief on a certain portion of the male torso.’ The coin we all dreaded didn’t look that terrible.”

1915 S Panama-Pacific International Exposition half dollar.  The obverse, designed by Chief Engraver Charles E. Barber, shows a representation of Columbia scattering flowers and the back of a naked cherub holding a cornucopia.  The design reprises one Morgan created for the reverse of the 1907 U.S. Mint medal marking the departure of the Great White Fleet for its around-the-world cruise to show the flag and American might.