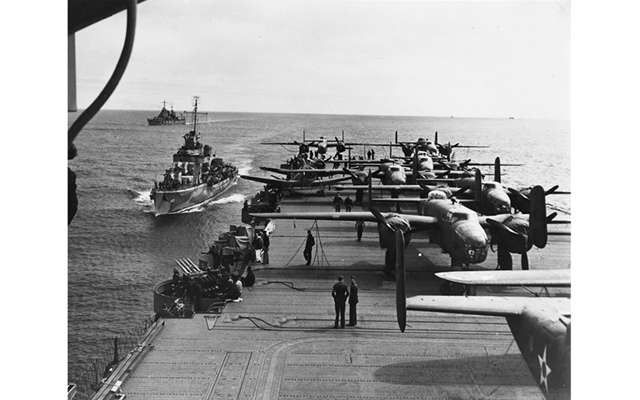 A congressional gold medal being awarded April 15 recognizes the World War II exploits of Doolittle’s Raiders. Eighty airmen of the U.S. Army Air Forces, led by Lt. Col. James H. “Jimmy” Doolittle, took off April 18, 1942, in B-25 bombers from the flight deck of the USS Hornet en route to bomb strategic locations in Japan, including Tokyo.

I’m looking forward to visiting the National Museum of the U.S. Air Force in Dayton, Ohio, on April 18. On that day, the 73rd anniversary of the Doolittle Raiders bombing of Tokyo and other strategic Japanese cities during World War II, the museum will see the delivery, via B-25 bomber, of the congressional gold medal recognizing the heroism of 80 United States airmen. The museum is the medal’s final resting place.

Congressional leaders will have formally presented the medal to the Doolittle Raiders on April 15, at Emancipation Hall of the Capitol Visitor Center in Washington, D.C.

Just three of the 80 airmen, who took off in 16 five-man crews in B-25 bombers from the flight deck of the USS Hornet, on what was billed as a suicide mission, are still alive today.

One of the three is expected to attend both the Washington, D.C., and Dayton, Ohio events, and a second survivor is anticipated to join him at the Dayton event.

Of the 80 Doolittle Raiders, several died from injuries sustained when their aircraft was downed by enemy fire. Some died in captivity under enemy control. By the end of World War II, 17 of the original 80 who participated in the mission were gone.

Commissioned as a second lieutenant and rated as a pilot on May 29, 1941, Hite, the co-pilot of one of the 16 B-25 bombers, was captured after the Tokyo raid and imprisoned by the Japanese for 40 months. Hite was liberated by American troops on Aug. 20, 1945, and remained on active duty until Sept. 30, 1947. Hite returned to active duty during the Korean War.

Thatcher was an engineer-gunner. After the Tokyo Raid, Thatcher served in England and Africa until discharged from active duty in July 1945.

As a second lieutenant, Cole was the co-pilot in the lead plane piloted by Lt. Col. James H. “Jimmy” Doolittle. Following the raid, Cole remained in the China-Burma-India theatre of operations until June 1943, and served there again from October 1943 to June 1944 before being relieved from active duty in 1947.

The heroic efforts of these three brave airmen and their comrades on a mission targeted to end the war in the Pacific as soon as possible is now being recognized with the awarding of the congressional gold medal.

Collectors and the general public have the opportunity to support that recognition when the U.S. Mint offers for sale 1.5-inch and 3-inch bronze duplicates of the gold medal.